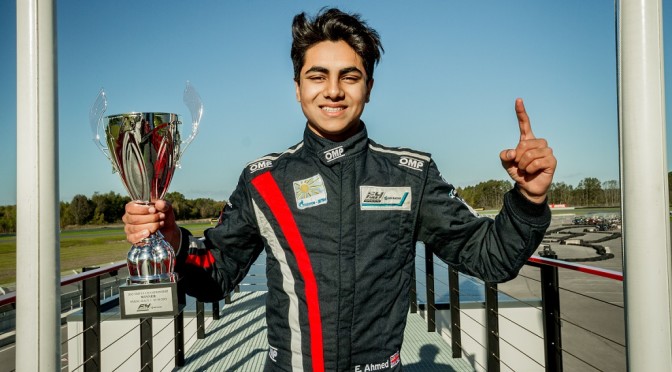 Success breeds success. That seems to be the case in the young life and fast times of F1Weekly friend, Enaam Ahmed. In 2014, at the age of 14, he won five junior karting titles with Ricky Flynn Motorsports, including the European and World Karting Championships. This achievement put him a year ahead of a certain Lewis Hamilton who was 15 when he triumphed in the 2000 European and World karting championships.

The newly launched Formula MSA, with backing and blessings of the FIA, was Enaam’s stomping ground in 2015. After a challenging first half of the season, Enaam began the push to the front. His reward was the Rookie of the Year title and the season finale at the Brands Hatch Grand Prix circuit, located in beautiful Kent countryside, saw Enaam take his first win of the season in the UK-based series.

The FIA initiative to provide a decent budget single-seater championship for young drivers graduating from karts to cars has seen the launch of Formula 4 in major motorsports market. In continental Europe, the Italian F4 was launched last year and, apart from the UK Formula MSA, the 2015 season also saw the launch of the German F4 and the NEZ F4 championship, the latter catering to Nordic, Baltic and Russian markets.

Enaam sampled some of the rounds in the NEZ category. Highlight of his overseas campaign was winning all three races in the final round at Parnu, Estonia.

In preparation for the 2016 season, the London lad recently took part in the Spanish F4 Winter series. The two round series held three races at Jerez de la Frontera, (Dec. 4-6)famous for the 1986 last lap duel that ended in one of the closest finishes in F1grand prix racing history (Senna vs Mansell), and three races at the beautiful Portimao circuit (Dec. 11-13) in Algarve, Portugal. 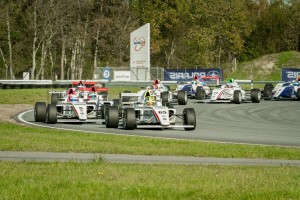 In the opening round Enaam was on the podium in all three races, a pair of third and a second place finish in the second race of the weekend. Making the job very hard to grab the championship prize of EU 75,000 was the fact that all three races of the Spanish round were won by the more experienced 17-year old Finn Simo Laaksonen.

The reign in Spain may have shined on Simo but the tide and weather was turning in Portugal after Enaam won the opening race of weekend after leading from start to finish. He was about half a second faster in every wet practice session

Enaam raced to another dominant win in the second race, his chances of winning the rich prize, unheard of in entry-level racing, were boosted as Laaksonen was eliminated early in the race after colliding with Canadian Devlin Defrancessco. Enaam’s victory slipped to second place finish after he was given a five second penalty for not slowing down sufficiently under a yellow flag. The penalty left him with only one point ahead of Laaksonen going into the crucial and final race of the winter series.

The one point lead came with excess baggage. Laaksonen’s early exit in race two meant he had better tires for the EU75k grab fest. When the lights went out, it was game on for the two young combatants. Enaam shot into the lead at the start and held the Finn at bay, but on lap 9 Laaksonen went ahead. This turned out to be short lived as Enaam went on the outside at turn 10 to regain the lead.

The Winter Series Champion in his own words; “That was the hardest race of my life! Laaksonens tires were so much better so I knew I would have to defend hard. Fair play to Simo, he gave me racing room, and it was a very fair fight

“I have to thank Koiranen GP for this opportunity….where else do you win prize money like this?! It’s awesome! I also have to thank my dad and the guys at Edge management for helping and guiding me to this win.”