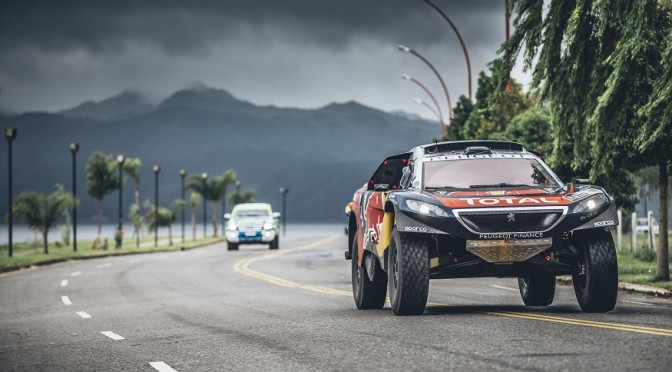 The action may have stalled on the second day of the 2016 Dakar Rally, but that did not mean the day was without challenges for the competitors signed up for the world’s toughest race. While there was no racing against the clock, a route in excess of 500km between Rosario and Villa Carlos Paz still had to be completed amid torrid weather conditions.

After first delaying the start of the timed special stage, the decision was eventually taken by race organisers to cancel today’s racing completely. Heavy downpours accompanied violent thunderstorms in the region and swollen rivers meant that entire sections of the proposed track were deemed to dangerous to cross. In addition to hazardous conditions on the course, the storms also dictated that the safety helicopters which support the race had to stay grounded.

Today’s test for the bikers and quad riders was not about speed but simply about survival. After setting off at 4am this morning from Rosario they were out on the road in treacherous conditions for 10 hours before arriving at the bivouac in Villa Carlos Paz. An unchanged leaderboard was the furthest thing from their minds as they peeled themselves out of their soaked racing overalls.

Quad bike contender Mohamed Abu Issa of Qatar admitted that things got so bad out on the road that he considered quitting the race. Spain’s bike race leader Joan ‘Bang Bang’ Barredawas in no doubt that the organisers made the right decision calling off the stage.

It was also a long and tiring day for the Dakar’s car and truck crews, even if they could rely on protection from the elements inside their vehicles.

Defending car race champion Nasser Al-Attiyah managed to find the positives in an otherwise disappointing day. The Qatari will drive the fourth car to start tomorrow’s stage and is well placed to set the day’s fastest time.

The hope inside the bivouac is that the rainstorms will blow over soon so the racing can really begin at this edition of the Dakar on Monday. With around 500km of timed competition planned for all four categories tomorrow, the forecast for top class offroad racing on the route to Termas de Rio Hondo remains optimistic.