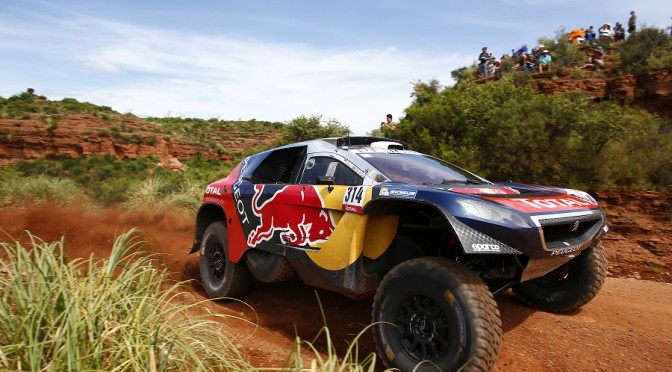 LOEB IN THE LEAD

With nearly 400km of competitive racing now completed at the 2016 Dakar Rally, motorsport’s toughest test of endurance is truly underway once more. Competitors were able to release the tension built up during a stop-start opening to the Dakar and it was the Red Bull Desert Wings that left the biggest impression on the day’s results.

Making a splash on the rain affected course was Dakar debutant Sébastien Loeb as he flew through the 387km stage in a time of 3h 45m 46s. The Frenchman and his Monegasque co-driver Daniel Elena have wasted no time in repaying the faith shown in them by Team Peugeot-Total; they hold the race’s overall lead overnight. Today’s Dakar destination of Termas de Rio Hondo has proven a happy hunting ground for Loeb before, he won a World Touring Car Championship race here last March.

Loeb’s countryman Stéphane Peterhansel is up to second in the general classification after the 11-time Dakar winner put in a solid display while fellow PEUGEOT 2008DKR16 driver Cyril Despres holds seventh place. Carlos Sainz, the fourth member of the Peugeot convey, lost 12 minutes due to engine-related trouble midway through the stage but recovered to stay within view of Loeb on the leaderboard.

South Africa’s Giniel de Villiers kept the nose of his Toyota Hilux as clean as he possibly could given the muddy conditions to post the day’s fourth best time. Defending Dakar championNasser Al-Attiyah gave up four minutes on Loeb due to time spent stuck in the mud and also a puncture to fix, but is well placed to attack tomorrow.

Elsewhere there were steady days for Polish Red Bull-backed drivers Adam Malysz, KubaPrzygonski and Marek Dabrowski as they arrived at the Termas de Rio Hondo bivouac in the top 25 overall.

There was also a Desert Wings stage win to celebrate over in the bike race as Toby Price of theRed Bull KTM Factory Team set the pace. The Australian rider covered the 354km bike stage in an impressive 03h 46m 24s to crush the idea that his podium finish last year was anything to do with beginner’s luck. Price’s KTM team-mate Matthias Walkner put in another great performance to sit fifth overall, less than two minutes behind Price in the overall standings.

Prologue stage winner Joan ‘Bang Bang’ Barreda now lies one place behind Walkner while Portugal’s Hélder Rodrigues has slipped to 15th in the general classification. It was a mixed bag for first timers Iván Cervantes of Spain and Antoine Méo of France. Cervantes is two-seconds ahead of Rodrigues while Méo will continue his Dakar education nearly half an hour behind the Iberian pair for now.

The new week got started with great news for the Dakar truck crews as their race finally commenced. Team Kamaz Master enjoyed a steady opening day of action with their three former Dakar champions – Ayrat Mardeev, Eduard Nikolaev and Andrey Karginov – all placing in the top 10 and within touching distance of early leader Hans Stacey. The fourth Kamaz truck, driven by Dmitry Sotnikov, is just a little further back in 13th overall.

This edition of the Dakar is now fully in gear and has already delivered three stage wins by the Red Bull Desert Wings. Thoughts turn to tomorrow’s action when competitors will be tasked with rocking and rolling along mountain tracks on the route to Jujuy, as a further 314km of timed racing awaits.