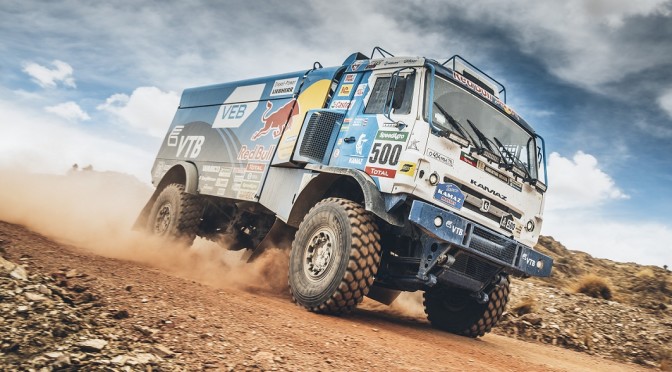 The 2016 Dakar Rally may have entered a new country today, but there was no change in the car race as Team Peugeot-Total continued to stamp their authority on the contest. A second consecutive 1-2-3 finish, led home by rookie Sébastien Loeb, sees three Peugeot crews parked in the podium positions of the overall rankings.

Stage five of the Dakar took the convoy of competitors out of Argentina and onwards to Bolivia via 321km of timed racing at an average altitude of 4,000 metres above sea level. Dakar debutant Loeb took all challenges in his stride to once again record the day’s quickest time. Peugeot team-mate Carlos Sainz of Spain was in close attendance to the Frenchman and he come home just 22 seconds behind. The third-quickest driver on the stage was Stéphane Peterhansel, also at the wheel of the pace-setting Peugeot 2008DKR16.

Reigning Dakar champion Nasser Al-Attiyah endured another day of trying to keep up with the Peugeots. The Qatari driver, a two-time winner at this event, finished up 3m07s behind Loeb on the route between Jujuy and Uyuni. South Africa’s Giniel de Villiers is another former Dakar winner doing his best to stay in touch with Loeb’s blistering pace: another 8m36 was lost to the nine-time WRC winner today. The fourth Peugeot 2008DKR16, driven by five-time bike race winner Cyril Despres, suffered turbo problems on the stage but recovered to bring the car home – ready to go again tomorrow.

With Despres and fellow five-time winner Marc Coma no longer competing on bikes, the race is waiting to crown its first new champion in a decade. Toby Price of the Red Bull KTM Factory Team continues to throw his hat in the ring as a contender for glory on two wheels this year. A perfect ride from the Australian scored him the stage win – repaying his savvy tactics during the first part of the marathon stage.

It’s unusual for Team Kamaz Master to have to wait five Dakar days before recording their first stage win, but that wait is now over. Former race winner Eduard Nikolaev did the honours on behalf of the Russian team as all four crews made ominous moves up the leaderboard today. It seems that Kamaz are now hitting their stride and that’s not good news for the trucks currently occupying the podium positions.

Things did not go the way of Marcos Patronelli on the road to Uyuni following yesterday’s stage win. The Argentine drove the day’s eighth-fastest quad, but the news was far worse forMohamed Abu Issa. A faulty battery appears to have ended the ambitious Qatari’s hopes for a podium finish this year.

Tomorrow’s stage is set to be a genuine highlight of this Dakar, amazing scenery around Uyuni is guaranteed as the race is run between 3,500 and 4,200 metres above sea level. Can the upstarts maintain their lead or will experience tell as we approach almost 5,000km covered in total? The 542km loop around the Salar de Uyuni will doubtless give us a clearer picture of how this race could end