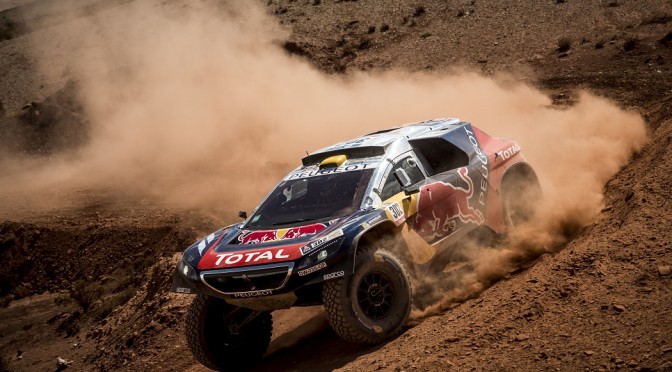 Stage six at the Dakar Rally was a day for big moves as competitors hit their groove during a 542km loop around the Salar de Uyuni. The headline news of the race’s first week has undoubtedly been Team Peugeot Total’s domination, with 11-time Dakar champion Stéphane Peterhansel now leading the charge. It’s not just in the car category where the Red Bull Desert Wings are showing their class as the squad also celebrated outstanding bike, truck and quad results in Bolivia.

The Peugeot 2008DKR16 was once again the fastest car of the day, as it has been every day so far at this Dakar. Stéphane Peterhansel was taking no prisoners as he tore through the route to collect the 64th Dakar stage win of his illustrious career. The Frenchman was followed home by his Spanish team-mate Carlos Sainz, with just 17 seconds separating the pair. Rally raid rookieSébastien Loeb kept his own Peugeot in touch with Monsieur Dakar despite suffering two punctures to finish 8m15s behind his fellow Frenchman. The fourth Peugeot 2008DKR16 of Cyril Despres fought back from a difficult stage yesterday to set the 11th-quickest time. Elsewhere, Qatar’s Nasser Al-Attiyah and South Africa’s Giniel de Villiers lost further time to the Team Peugeot-Total trio that continue to occupy all three podium places. The Red Bull-backed Polish trio of Kuba Przygonski, Adam Malysz and Marek Dabrowski all recorded top 20 results on the stage.

It was a contrasting day for Hélder Rodrigues and Joan ‘Bang Bang’ Barreda as they moved in opposite directions in the general classification. After placing fifth on the stage Portugal’s Rodrigues is up to sixth overall as he aims for a third Dakar podium. Meanwhile, Barreda’s Honda suffered mechanical problems on the same stage that put pay to his title ambitions last year. The Spaniard was towed to the finish line and will now focus on collecting a few stage wins in the second week of the race.

A second quad race stage win of the year for Marcos Patronelli will ensure he gets a great reception as the rally returns to his native Argentina tomorrow. The two-time Dakar winner has surged up the rankings following a couple of tricky opening stages; he’s now set to battle it out with his brother Alejandro during the second week of the race. One quad racer whose Dakar will not be continuing is Mohamed Abu Issa, the Qatari was forced to retire after getting stuck in a mudhole while leading yesterday’s stage.

Team Kamaz Master continue to make their presence felt at the head of the truck race with reigning Dakar champion Ayrat Mardeev and former winner Eduard Nikolaev keeping overall leader Hans Stacey in their sights. The Russian pair hold fifth and seventh place in the general classification, Mardeev is 12m06s behind Stacey with Nikolaev a further minute back.

The Dakar convoy leaves Bolivia tomorrow with 336km of timed racing set to take place before arriving in Salta, Argentina in the evening. Salta will host the Dakar’s rest day on Sunday, a great opportunity for competitors to take stock after a tough first week and plan their tactics for reaching the finish line.