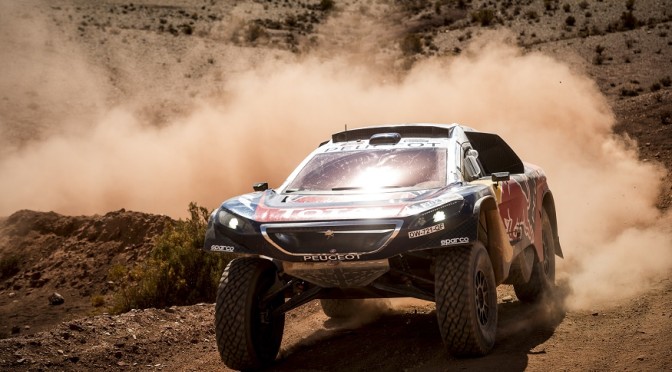 Violent storms returned to the Dakar Rally during a turbulent seventh stage that saw more lightening quick times set by the Red Bull Desert Wings. Heavy rain on the Bolivia/Argentina border did nothing to dampen the speed of Carlos Sainz as he ensured the Peugeot 2008DKR16 was the fastest car on the stage for a sixth consecutive day. Despite the Spaniard’s blistering pace, the sight of his team-mate Sébastien Loeb in the rearview mirror was never far away as the Frenchman came home 38 seconds later to place second on the stage. Loeb and his co-driver Daniel Elena actually finished the first part of the special stage two minutes ahead of the rest. Then during the second timed section they battled back from turbo problems and a slight navigational hitch to get back on the attack.

Today’s results see Dakar debutant Loeb return to the top of the overall classification with the spot guaranteed for the rest of the weekend with all competitors getting a well-earned day off tomorrow. 11-time Dakar winner Stéphane Peterhansel sits second overall, 2m22s behind Loeb with Sainz a further 2m28s back in third as Team Peugeot-Total hold a clean sweep of the podium positions. Cyril Despres continued his own four wheel education with a fine sixth place finish on the stage at the wheel of the fourth Peugeot.

Defending Dakar champion Nasser Al-Attiyah had his foot down today as he strives to stay in touch with the trio of Peugeots ahead of him. The Qatari is hopeful of turning the tables during the Dakar’s second week as he trails Loeb by 17m36s while in fourth place overall. South Africa’s Giniel de Villiers is another who has tasted victory at the Dakar and will look to use his position of sixth in the general classification as a springboard for success on next week’s route to Rosario.

Marek Dabrowski ended the week on a high note with the day’s 17th best time with fellow PoleKuba Przygonski a further 12 places back. It was a tough day for the third Red Bull-backed Polish driver at the Dakar as Adam Malysz remained stuck on the stage as night fell.

It has been a memorable first week of Dakar racing for five-time World Enduro championAntoine Méo. The Red Bull KTM Factory Team new recruit has been quick to adapt to rally raid riding despite it being a completely new discipline for him. The Frenchman won today’s bike stage following 02h27m27s of terrific riding and now sits fifth in the overall classification. KTM also saw Toby Price move up to second position overall while Jordi Viladoms is poised to take advantage of some technical stages still to come.

Meo, Price and Viladoms will be without their team-mate Matthias Walkner for the second week of the Dakar. The Austrian suffered a fall 15km into today’s stage which resulted in a broken femur and will fly home early. We wish him a speedy recovery and look forward to seeing him back on his bike soon. Many riders, including race leader Paulo Gonçalves, demonstrated the true spirit of the Dakar as they stopped to wait with Walkner while the medical helicopter flew to collect him.

Still in with a shout of a podium finish is Portugal’s Hélder Rodrigues who can enjoy his day off from the vantage point of sixth overall. Iván Cervantes of Spain may not be matching Meo’s Dakar debut heroics, but another solid top-10 ride today places the Spanish rider 18th in the general classification.

After suffering mechanical misfortune on yesterday’s stage Joan ‘Bang Bang’ Barreda decided to withdraw from the race this morning due to an injured hand. Barreda set the fastest time on three of the six days he raced at this edition of the Dakar and will be back to show his speed in the future.

There’s still plenty of racing left in Team Kamaz Master as they completed their strong finish to the week. Former Dakar winners Eduard Nikolaev and Ayrat Mardeev are at the controls of two Russian trucks making a charge up the rankings. Nikolaev won today’s stage and was followed home just 58 seconds later by Mardeev. The latest results put the duo both within 11 minutes of race leader Pieter Versluis, a minimal gap in the ever fluctuating truck contest.

It’s turning out to be a family affair in the quad race with Alejandro and Marcos Patronelliincreasing the cushion between themselves and the rest as the Dakar left Bolivia and returned to the brothers’ native Argentina. With four Dakar wins between them already it looks like a fifth could be waiting in Rosario.

There’s no racing against the clock tomorrow, but don’t let the term ‘rest day’ deceive you. Competitors will be putting in a long shift on Sunday alongside engineers and mechanics to ready their machines for the remaining 4,000km that still stands between themselves and the Dakar finish line.