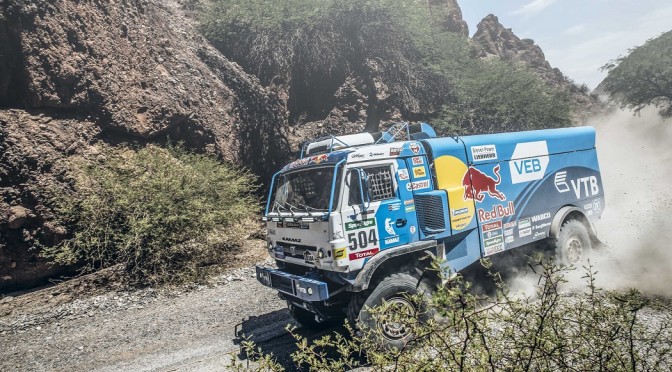 DAKAR SPRINGS BACK TO LIFE AFTER A DAY OF REST

The Dakar’s final week commenced with dune racing as the dimensions of the contest changed from flat-out speed to navigational challenges on the 393km timed route from Salta to Belén.

Defending Dakar champion Nasser Al-Attiyah talked openly during the rest day about his intentions to take the fight to the three Peugeot crews that started today in the car race podium positions. At the conclusion of today’s racing it’s now Al-Attiyah and co-driver Mathieu Baumelwho are celebrating their first stage win of this Dakar, as they managed to get ahead of all fourTeam Peugeot-Total crews for the first time at the rally. The Qatari used all his desert racing experience on the dunes and off-piste sections of stage eight while his French co-driver ensured their were no navigational mistakes along the way.

Closely challenging Al-Attiyah was the Peugeot driven by Carlos Sainz with only 12 seconds separating the former Volkswagen team-mates at the end of today’s stage. The Peugeot 2008DKR16 of 11-time Dakar winner Stéphane Peterhansel was also on the pace despite an early setback on the stage.

Peterhansel now heads the general classification after this morning’s leader Sébastien Loeb ran into problems on the stage. Frenchman Loeb and Monegasque co-driver Daniel Elena got their Peugeot stuck in the sand early on the stage and worse was to come just 11km from the day’s finish line. Loeb’s Peugeot rolled several times after hitting a channel in a riverbank, leaving driver and co-driver working frantically by the side of the road to get their machine to the end of the stage. Under the intense glare of the sun, Loeb and Elena were able to get back on the move and finish the stage. The Dakar debutants lost over an hour to team-mate Peterhansel and now sit eighth in the overall rankings.

Among the members of the Red Bull Desert Wings squad still going strong at this Dakar is Australian biker Toby Price. Today proved memorable for the Red Bull KTM Factory Teamracer as a stage win saw him leapfrog Paulo Gonçalves to take the overall lead. Price beat the Portuguese rider by 5m17s to open up a cushion of 2m05s at the head of the bike race. The manner in which Price rose to the challenge of racing on the most technical stage so far of this Dakar suggests he can now hang onto top spot on the road to Rosario.

Price’s consistency is all the more remarkable given that he is racing only his second Dakar – he finished third on his debut 12 months ago. This year Price has a debutant team-mate inAntoine Méo and the Frenchman was forced to open the road following his stage seven win. On a stage littered with potential navigational pitfalls, Méo lost his way while facing dunes for the first time, but dug in to maintain sixth place in the overall rankings.

The bike race has started its second week missing two of its biggest personalities: Joan ‘Bang Bang’ Barreda was forced to retire in Bolivia while Matthias Walkner is out as well following an accident in which he broke his leg on stage seven. Like all Dakar competitors, these guys are made of strong stuff and will be back and fighting soon.

On the quads today it was Marcos Patronelli who led throughout the 393km timed special, winning the stage and passing his brother Alejandro in the general classification to lead the race. Both brothers already have two Dakar wins each and every passing day makes it look more likely that one of these Argentine siblings will be celebrating a third title when we get to Rosario on Saturday.

The big move in the truck race came from former Dakar champion Eduard Nikolaev of Team Kamaz Master. The Russian trucker scored the second-fastest time on the stage to rise from fourth to second overall. The gap between Nikolaev and race leader Gerard de Rooy stands at under eight minutes, hardly an insurmountable gap given that five days of racing remain.

There are plenty more dunes and off-piste navigation on the menu tomorrow at the Dakar as all four categories embark on a 285km timed loop around the bivouac in Belén. With temperatures soaring  in northern Argentina we’re promised another gruelling test of both man and machine. There are extra complications for the bikes and quads as they embark on the first half of their second marathon stage at this Dakar.