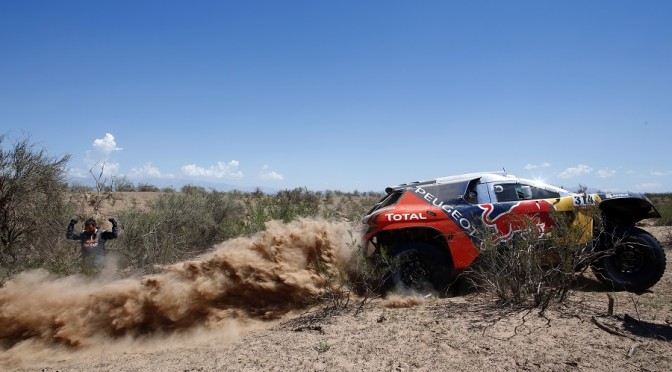 TEMPERATURES SOAR IN THE DAKAR RALLY

The Red Bull-backed Peugeot 2008DKR16 of Carlos Sainz takes the overall lead with a fine stage win today. There’s another member of Team Peugeot-Total in second overall, as 11-time Dakar winner Stéphane Peterhansel battled back from getting stuck in the sand on stage nine.

Nine-time WRC winner Sébastien Loeb was back in the race today after rolling his car yesterday. Loeb’s car was repaired overnight and he return for more action today. The Frenchman and co-driver Daniel Elena got stuck in the sand several times and also had to make mechanical repairs on the stage. They came home 1h13m47s behind Peugeot team-mate Sainz.

The news was better for the Peugeot 2008DKR16 driven by Cyril Despres: the five-time bike race winner clocked the day’s sixth-fastest time. Despres could have recorded an even better time, but he stopped to help Peugeot team-mate Peterhansel.

Nasser Al-Attiyah is continuing the fightback by showing his mastery of the off-piste stages. The Qatari was quickest on the splits before encountering two punctures simultaneously – but he has still managed to consolidate his third place.

Toby Price continues to lead the bike section, stretching his advantage to more than 24 minutes at only his second Dakar. But a portion of his hard work came to nothing when the organisers cancelled the stage after CP2, two thirds of the way into the stage, due to extreme heat that had affected previous competitors. The Australian completed the whole stage, before it was shortened, and won that convincingly as well.

In the quads, Marcos Patronelli maintains the lead by just over a minute, while there are also no movers in the truck category, with Gerard de Rooy still hanging on to an advantage over Kamaz’s Eduard Nikolaev.

All the motorbikes and quads now go straight to parc ferme as today was the first half of the second marathon stage of this Dakar, which meant that none of the vehicles were allowed mechanical assistance from service crews at the bivouac.

Tomorrow, they face even bigger sand dunes, with the Fiambala dunes section that are set to provide the biggest challenge of the rally to date over 278 km. External temperatures today have peaked at 47 degrees centigrade – less than 10 degrees off the highest temperature ever recorded in the world, which was 56.7 degrees in Death Valley, California.