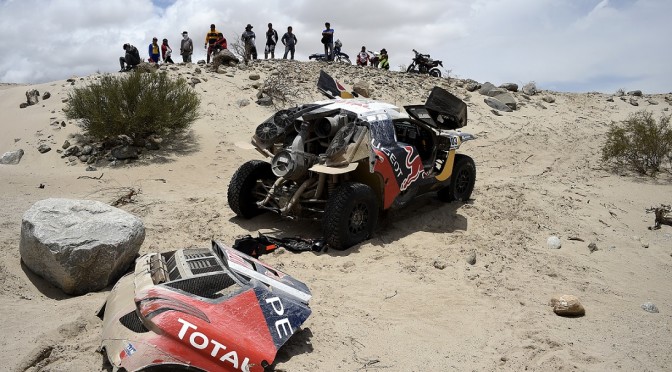 As sure as day follows night, the Dakar Rally’s perennial trip to the Fiambalá dunes proves a decisive factor in determining success and failure at the world’s toughest race. Legions of competitors fell by the wayside during today’s 245km timed special stage between Belén and La Rioja, but a trio of Red Bull Desert Wings stood tall to lead the car, bike and quad races at this Dakar.

The intense difficulty of today’s route was underlined when even the new car race leaderStéphane Peterhansel ran into trouble in the early part of the stage. Peterhansel and co-driverJean-Paul Cottret lost 15 minutes just 32km into the stage as they tracked down the day’s first waypoint. The setback was soon behind them however as the French crew and their Peugeot 2008DKR16 powered through the rest of the stage in the day’s quickest time, a flat tyre the only other hiccup along the way.

11-time Dakar winner Peterhansel was followed home by fellow Team Peugeot-Total driver Cyril Despres as the five-time bike race victor continued his fine start to the second week of the rally. Meanwhile, this morning’s race leader Carlos Sainz endured a horrid day at the Dakar. The Spaniard suffered a flat tyre and navigation issues before landing his Peugeot on a huge rock which impacted the spacer between gearbox and engine. This may have put pay to Sainz’s ambitions of winning a second Dakar, but he’ll remain in the hunt for stage wins.

The fourth Peugeot 2008DKR16, driven by nine-time WRC winner Sébastien Loeb, struck back after two testing days to go fifth-fastest on the stage. The top 5 result was achieved despite 10 minutes stuck in the sand, two punctures and a roll in the dunes after which the help of spectators was required to get the car back on its wheels.

The main benefactor of Peugeot’s problems was defending Dakar champion Nasser Al-Attiyah. It was hardly a smooth day at the office for the Qatari, his Mini ended up on its roof after just 6km, but along with French co-driver Mathieu Baumel the duo came home with the day’s fourteenth-fastest time to move second in the overall classification. South Africa’s Giniel de Villiers now occupies third place in the general rankings after more steady driving from the serial podium finisher.

Temperatures in the mid-40 degrees centigrade led to a mandatory cooling down break in the bike race, during which riders spent time in refrigerated trucks. If leading biker Toby Price was feeling the heat the Red Bull KTM Factory Team biker certainly didn’t let it show. The Australian rode a tactically sound second half of this marathon stage to end the day with a cushion of 23m12s from his nearest rival with three day’s racing remaining.

Price upset the status quo during his Dakar debut 12 months ago when he finished on the podium and now his team-mate Antoine Méo is threatening to do the same. The Frenchman, a five-time World Enduro champion, has excelled himself during his first experience of dune racing and now lies less than 10 minutes off third spot in the general classification.

Quad race leader Marcos Patronelli may have narrowly missed out on the stage win by 29 seconds, but the Argentine was still able to increase his lead at the front of the race by nearly a minute from his brother and fellow two-time Dakar winner Alejandro.

The feeling inside Team Kamaz Master was that the time had come to go on the attack if they were to reel in truck race leader Gerard de Rooy. At the start of the stage Kamaz’s Eduard Nikolaev was around 30 minutes behind the Dutchman in the overall standings, but midway through today’s racing the Russian had reduced the arrears to under 15 minutes. Nikolaev’s extreme pace was to land him in trouble though as his truck fell onto its side after hitting an obstacle on the stage. Following Nikolaev’s misfortune it’s now his Kamaz team-mate Ayrat Mardeev who sits second overall behind de Rooy.

With so many competitors and machines coming back battered and bruised to the bivouac in La Rioja it’s looking like a long night for mechanics. With plenty more sand on the menu tomorrow during the 431km timed route to San Juan there’s still lashings of drama left to play out at the 2016 Dakar Rally.