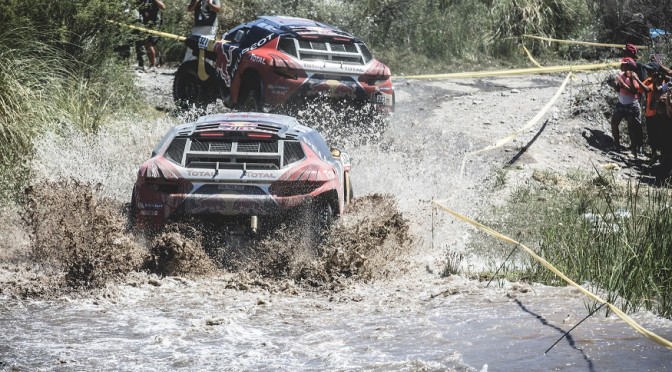 Another sandy stage at the Dakar Rally resulted in further movement on the leaderboards today as caution was thrown to the wind across all four categories. Stage 11 featured a mix of soft terrain including the infamous fesh-fesh sand synonymous with northern Argentina along the route from La Rioja to San Juan. Today’s stage winners featured a trio of Red Bull Desert Wings: Antoine Méo, Nasser Al-Attiyah and Eduard Nikolaev.

Defending Dakar champion Nasser Al-Attiyah has the appearance of a man in a class of his own when it comes to racing on sand and today was no exception as he took the stage win. Alongside French co-driver Mathieu Baumel a masterclass of off-piste rally raid racing was put on by the Qatari as he inched closer to the race’s summit.

Despite losing 8m05s to Al-Attiyah on stage 11 it is still Stéphane Peterhansel of Team Peugeot-Total who leads the car race. 11-time Dakar winner Peterhansel had the tricky job of opening the road today following yesterday’s stage win. In the end the Frenchman was satisfied to finish up with an overall lead of 51m55s over Al-Attiyah in second place with just two day’s racing remaining.

Nine-time WRC winner Sébastien Loeb was able to put a trio of testing days behind him to finish second-fastest on this stage, despite being towed for the final 2km by Cyril Despres after his Peugeot 2008DKR16 suffered problems with the transmission and the power steering pump. Despres himself was seventh-quickest today even though he slowed down to help Loeb. The fourth member of Team Peugeot-Total, Carlos Sainz, did not race today after his car was deemed unrepairable last night.

The bike race was once again cut short due to extremely high temperatures on the course with the planned 431km shaved down to 243km. Keeping the coolest head out on the stage was Dakar debutant Antoine Méo who continued his South American adventure with a second stage win of the race. The Frenchman’s rapid adaption to rally raid now sees him occupy third place in the overall rankings after chasing down Pablo Quintanilla.

Top of the tree in the bike race is still Méo’s fellow Red Bull KTM Factory Team member Toby Price. The Australian was able to increase his cushion over second-placed Stefan Svitko by 12m11s to now lead the race by an impressive 35m23s.

Pressure was applied by Team Kamaz Master’s Ayrat Mardeev on the leader of the truck raceGerard de Rooy. The Russian in second place overall took six minutes out of the Dutchman’s lead while Kamaz’s Eduard Nikolaev battled back from a tough day yesterday to win stage 11. Meanwhile, quad race leader Marcos Patronelli conceded 1m26s to his brother Alejandro, but maintains the overall lead by eight seconds.

There’s more than 900km to cover tomorrow during the Dakar’s penultimate stage with 450km of the route to be raced again the clock. With time running out to make an impression on the overall classification – expect big risks in the hope of big rewards