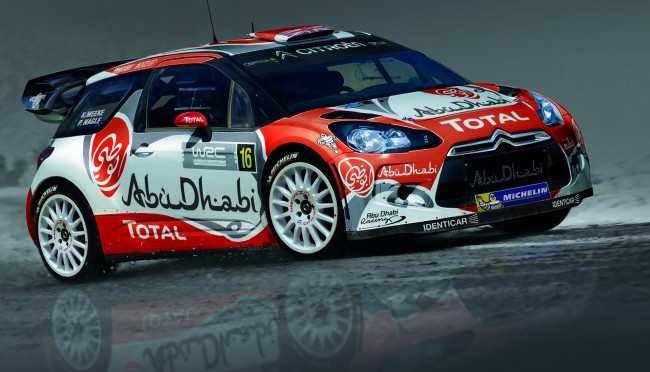 THE SEASON KICKS OFF WITH THE LEGENDARY RALLYE MONTE-CARLO!

The Abu Dhabi Total WRT has entered two cars at the Rallye Monte-Carlo (21-24 January), the opening round of the 2016 World Rally Championship. Kris Meeke/Paul Nagle and Stéphane Lefebvre/Gabin Moreau will have to meet the combined challenge of Monte’s demanding course and the typically wintry conditions that are expected at the event.

As usual, the new season – the final one for the generation of World Rally Cars that first appeared in 2011 – kicks off with the world’s most famous rally. Taking over from Citroën Racing – which is actively preparing for its return as a works team in 2017 – the Abu Dhabi Total World Rally Team will be competing at a number of European rounds of the WRC, starting with the Rallye Monte-Carlo.

Prepared by PH Sport and featuring the same technical spec as at the end of 2015, the two WRCs have been entrusted to crews of differing experience and ambitions. At 36 years old, Northern Irishman Kris Meeke is competing in what is already his eighth Monte-Carlo. After scoring a podium-finish here in 2014 alongside co-driver Paul Nagle, he has proven his ability to keep out of trouble on the tricky course in the south of France. Already very familiar with the car and the Michelin tyres that will be available, he may have greater freedom here and be able to adopt a bolder strategy!

In comparison, 23 year-old Stéphane Lefebvre’s experience is more limited. That said, the young Frenchman has nonetheless secured two category wins in his two appearances here! Last year, he pulled off a real coup in winning the WRC2 class after a flawless performance in his DS 3 R5. Now competing alongside co-driver Gabin Moreau, Stéphane will be contesting only his sixth WRC rally, but he is determined to grab the opportunity to showcase his skills!

The Abu Dhabi Total WRT will undertake preparations this weekend, with two days of pre-event testing organised near to Gap. Recce gets underway next Monday before the crews get back into their race cars for the shakedown on Wednesday afternoon. The ceremonial start of the 84th Rallye Monte-Carlo will be held on Thursday at 6.15pm in Monaco’s Place du Casino. Friday and Saturday’s legs will be held on roads around Gap, before the short final day on Sunday, which includes runs on the famous Col de Turini.

Kris Meeke (#7): “2016 is not just a new season, it’s the start of a new chapter in my career. I am extremely pleased to be competing at the Rallye Monte-Carlo with the Abu Dhabi Total WRT. Obviously, we are not in the same situation as the other WRC drivers. I don’t feel like I’m under a great deal of pressure, mainly because we’re not aiming for a particular result at the end of the season. At the Monte-Carlo, and at the other rallies, I’ll be looking to do my very best and get as much experience as possible. Although there are a few new stages, the course seems to be pretty similar to 2015. The major imponderable is the weather. If the cold conditions persist, we should have a lot of snow and ice on the stages. Instinctively, it’s a rally that I love because it sums up all the excitement of the start of a new season. But when you get to the service park and you have to make a tyre choice that will inevitably involve a compromise of some kind, the love can sometimes turn to hate! If we manage to have an error-free race and make the right calls, I think we shouldn’t be too far away from the podium.”

Stéphane Lefebvre (#8): “Monte-Carlo is a rally where I have done fairly well in the past, since I won my class in 2011 and then secured the WRC2 category win last year. This year, I would dearly love to get a good result and prove that I can be counted on. I like the course here, but I will be giving it all the respect such a legendary rally deserves. The Monte-Carlo is not a sprint like some of the other World Championship rallies. We saw last year how quickly gaps can be established and then disappear! You must never get too carried away and just build your strategy over the course of the stages. I’ll be counting on the experience of the team’s members to help me with that. I’ll also be getting advice from my gravel crew, Alexandre Bengué. I don’t have any specific goal as regards the result, because we don’t know to what extent the works teams have improved during the off-season. I would be pleased if I manage to keep improving something like I did at the end of last year on tarmac, whilst trying to stay in touch with Kris. I have the good fortune to have a team-mate who is very quick on these roads, so he’ll be my marker!”