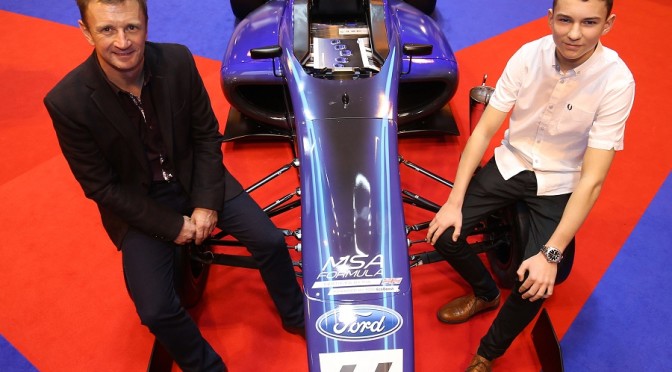 18 January, 2016 – The Autosport International Show has brought with it the announcement that Ross Martin will compete in the Ford EcoBoost-powered MSA Formula Championship in 2016. He will attack the track as a Fortec Motorsport driver thanks to winning the 2015 Formula Kart Star championship and with it the prize of a fully funded drive.

A proud Martin is understandably thrilled with the opportunity to compete in the championship: “There’s no other thing like it at any level in British motorsport. The MSA and Ford have put together a great championship with phenomenal drivers. We all know what an incredible brand Ford is and the 1.6 litre EcoBoost engine it supplies is fantastic.”

Safe in the knowledge of a fully funded drive for 2016, Ross has not had to contend with the pressures of securing sponsorship. “I knew I had sufficient funding in place, and therefore could focus on preparing for the year ahead as best possible. Of course it will be nice to get more sponsors on board, but that will hopefully happen as the season progresses.”

Ross also paid tribute to his mentor, three-time Le Mans 24 Hour winner Allan McNish: “He’s been giving me advice for three years. Having him in my corner has been a great help and advantage. Hopefully he’ll come to a few races this season. I would love to match his Le Mans record one day.”

Carolynn Hoy, Formula Kart Stars chairman, is convinced that in Ross Martin Formula Kart Stars has the perfect candidate to fly the flag for the series. “We have a worthy champion here. A very able driver. After his first test with Fortec, he’s already showing he’s got great potential for 2016 and beyond. He’s going to be carrying the torch for us and I’m certain he will be an excellent ambassador for the series.”

The opening rounds of MSA Formula – Certified by FIA, powered by Ford EcoBoost are set for Brands Hatch in early April. The series is Britain’s official version of the FIA’s Formula 4 concept and was introduced last season as a supporting series on the live-televised British Touring Car Championship package.