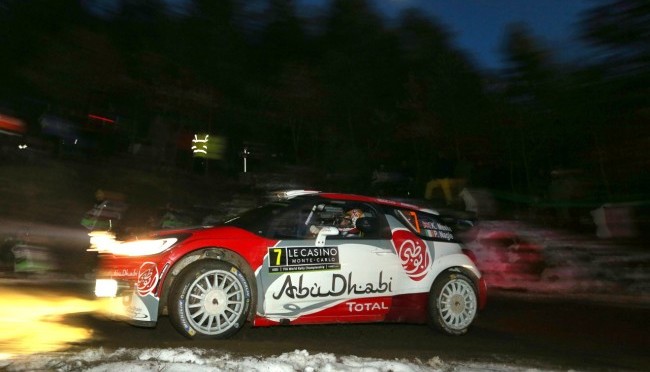 Taking the crews from Monaco to Gap, the opening leg of the Rallye Monte-Carlo was made up of two night stages. On the pace on SS1, Kris Meeke and Paul Nagle produced a stunning performance on the following test as they won the stage, taking them into the overall lead! In the second car entered by the Abu Dhabi Total WRT, Stéphane Lefebvre and Gabin Moreau ended the first day in the top ten.

From around midday, excitement about the Rallye Monte-Carlo really began to build in the Principality of Monaco with the official launch of the 2016 FIA World Rally Championship. In the afternoon, Khalid Al-Qassimi and Kris Meeke took a few lucky celebrities and journalists for an adrenalin-charged spin in their WRCs on a section of the legendary F1 track!

As darkness fell, the competitors pulled onto the start podium, set up in the Place du Casino. The crews then set off for Entrevaux, for the start of the very first stage of the year. Despite a spin that cost six or seven seconds, Kris Meeke grabbed second position. Making the most of his tyre choice – two Michelin Pilot Sport SS5 (super soft slicks) and two Pilot Alpin PA4 CL (with studs) fitted diagonally – the Northern Irishman set the fastest time between Barles and Seyne. After beating Sébastien Ogier by 11s, the Abu Dhabi Total WRT driver took the overall lead at the Rallye Monte-Carlo for the first time in his career!

Stéphane Lefebvre and Gabin Moreau also made a pleasing start to the rally. For the young duo – who are making their competitive debut here – the aim was to make it through these opening two timed stages. Gradually getting to grips with the cross-fitted tyre set-up, the 2014 FIA Junior WRC Champion helped himself to the seventh fastest time on SS2. Ninth overall, he made it back to service within fifteen seconds of the top five.

Following this short opening leg, day two of the 84th Rallye Monte-Carlo will be held around Gap, with six stages covering a total of 116.5km. The cars are due leave parc ferme from 8.45am.

Kris Meeke: “I was pleased with the first stage, despite a spin that cost me a little bit of time. We knew that the critical point would be on SS2, with the last few kilometres covered with snow and ice. Tyre choice was informed by this section, but we didn’t all end up going with the same option. I felt confident in the car straight away with the cross-fitted tyres and I managed to set a good time. We can’t get too carried away, we’ve only done two stages so far! It is difficult to predict what conditions will be like tomorrow. We saw on the road section that the outside temperature had already dropped to -9°C, so we can expect there to be a few patches of black ice on the early stages.”

Stéphane Lefebvre: “Along with Sisteron-Thoard, these were the two stages I was most apprehensive about. Compared to recce, the road conditions were totally different. Fortunately, my ice crews did a great job and there weren’t any tricky sections that they hadn’t noted. It was a good evening, during which we didn’t make any mistakes. It’s all the more pleasing given that these were my first stages with Gabin as co-driver. I had set myself the target of not losing too much time to the leaders. I think I can push more tomorrow. The stages on day two are more or less the same as in 2015 and I think that the experience from last year will help me improve this time.”