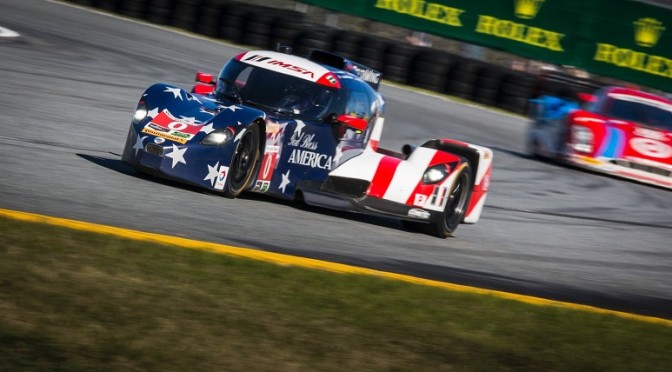 – Under sunny Florida skies, 54 cars fittingly started the 54th edition of the Rolex 24 At Daytona® at 14.40 EST on Saturday 30 January. As the race began the teams and drivers set out to go the furthest in 24 gruelling hours. The iconic Rolex 24 At Daytona® is regarded by many as the toughest endurance race and is now referred to as ‘The Rolex’. This weekend’s race marked the 24th anniversary of Rolex’s Title Sponsorship, making a win even more poignant for those competing. After an action-packed race it was Rolex 24 At Daytona® newcomer, Pipo Derani, in the Extreme Speed Motorsports Honda HPD Ligier JS P2 that took the chequered flag, as well as motor sport’s most sought after award: an engraved Rolex Oyster Perpetual Cosmograph Daytona watch, revered for its legendary status, reliability and performance.

MAN AND MACHINE
Like any great endurance race, the 2016 Rolex 24 At Daytona® wasn’t without drama. There were 21 cautions, 11 of those before the 10-hour mark, but these only added to the excitement of the race, inaugurating the redeveloped Daytona International Speedway and beginning the IMSA WeatherTech Sportscar Championship. With a high percentage of each lap spent at full throttle, the 3.56-mile circuit takes it toll on both the drivers and cars, demanding a unique combination of skill and concentration, as well as reliability and performance – the ultimate test of man and machine. This test proved too much for some, with only 43 of the 54 race starters making it to the finish line. The winning team, Extreme Speed Motorsports (ESM), completed 736 laps of the circuit and the fastest lap, 1:39.192, was posted by Brazilian Pipo Derani from ESM, who set the fastest time at Roar before the 24 earlier this month.

RACE AGAINST TIME
The Saturday afternoon racing provided fans, both in the Grandstand and infield, with action early on. With just over 20 hours to go, the #0 Panoz DeltaWing Racing car, in the eye-catching United States of America livery, sustained serious damage when its driver Andy Meyrick drove into a stationary Prototype Challenge car at Turn 1, spelling an early and disappointing retirement for the team after an impressive start. The long-awaited Ford GT race cars, preparing to race at the 24 Hours of Le Mans this year, both encountered transmission problems during the early stages of the race, but eventually finished in 7th (#66) and 9th (#67) positions in the GT Le Mans (GTLM) class. At the six-hour mark it was Michael Shank Racing, with Oswaldo Negri Jr at the wheel, who led the 2016 Rolex 24 At Daytona®, but shortly after midnight, a blown engine forced another retirement from the front. That led to a tussle for the lead between the Daytona Prototypes, including the #5 Corvette DP of Action Express Racing; Scott Pruett doing his usual exemplary job and simultaneously chasing down a record-breaking sixth win here at Daytona, a record that would prove elusive this time around.