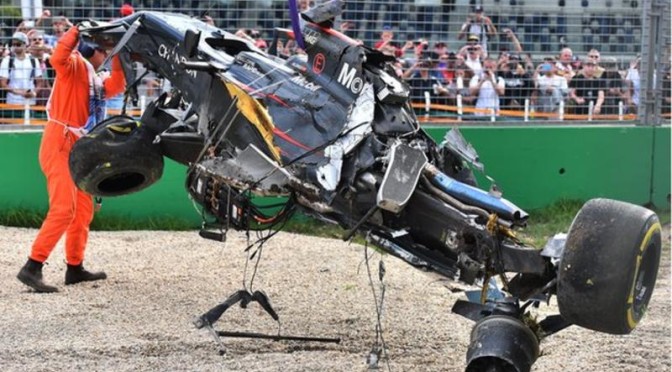 Trying to pass the Mexican on the run down to Turn Three, Alonso’s front right wheel tagged the right rear of the Haas and he was launched into a barrel roll, coming to rest upside down in the barriers.

The two-time champion was clearly shaken but, although he limped away from his car, he was uninjured.

For the re-start, Ferrari chose to keep Vettel on the fast but fragile super-soft tyres he had fitted at his first pit stop, while Mercedes switched Rosberg from soft to medium tyres with the aim of going to the end without another stop.

From that moment on, the race was Rosberg’s barring problems. He merely had to hang on to Vettel and wait for the Ferrari to stop, which he did on lap 35.

Because of new restrictions on radio transmissions, Rosberg was unaware of potential problems with overheating brakes and excessive wear on his left rear tyre. But, while on the edge, both issues stayed under control until the end of the race.