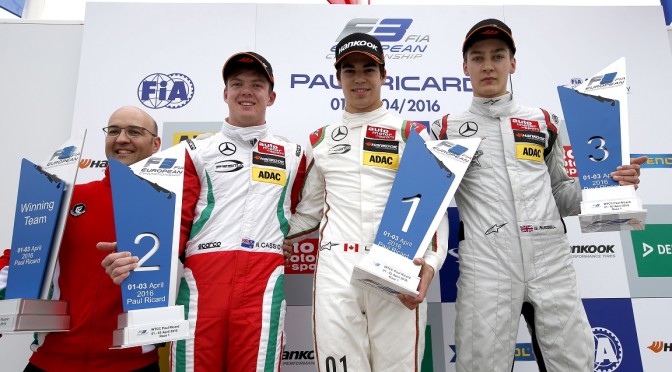 Lance Stroll (Prema Powerteam) got his second season in the FIA Formula 3 European Championship underway to the best possible start. In the first race of the year at the 3.841 kilometres long Circuit Paul Ricard, the 17-year-old Canadian beat his team-mate Nick Cassidy (Prema Powerteam) and took victory. British driver George Russell (HitechGP) claimed third place, finishing ahead of the best-placed rookie driver, Ben Barnicoat (HitechGP) in fourth. The winner of the first race of the season, Lance Stroll is also the first points’ leader of the 2016 FIA Formula 3 European Championship.

Having started from pole position, Lance Stroll initially had to hand the race lead to Nick Cassidy. However, he already claimed back the lead on lap two and held on to it until the finish of the race after 25 laps. 21-year-old Cassidy was able to follow his team-mate, but didn’t have a chance to mount a successful challenge.

Behind the Prema Powerteam duo, George Russell finished third. The 18-year-old Brit had a better getaway than rookie driver Niko Kari (Motopark), who was third on the grid, and moved up into third place on the opening metres of the race. After a collision with his team-mate Sérgio Sette Câmara (Motopark), the Fin lost even more ground and went on to finish his maiden FIA Formula 3 European Championship race in eighth place.

Ben Barnicoat, Maximilian Günther (Prema Powerteam), the second-best rookie driver Joel Eriksson (Motopark) and Ralf Aron (Prema Powerteam), who collected the trophy for the third-best rookie, filled the positions between Russell and Kari. After entertaining battles in the midfield, Harrison Newey (Van Amersfoort Racing) and Callum Ilott (Van Amersfoort Racing) claimed the final point-scoring positions by finishing ninth and tenth respectively. Ilott did so after impressive progress, because he had to start from the back of the grid following an engine change after an issue in testing on Thursday.

Lance Stroll (Prema Powerteam): “This was a good start into the season, both for myself and for the team. However, we have worked hard over the winter to achieve this. My start of the race didn’t go to plan, which certainly was also due to the fact that the track wasn’t entirely dry yet. That was too bad, because I always had very good starts during testing. Fortunately, only Nick got past me and when he made a mistake at the end of the first lap, I was able to overtake him again.”

Nick Cassidy (Prema Powerteam): “For me, the first few metres were very good, although my starts over the winter had been terrible and I wasn’t too confident about my starts either. Unfortunately, I made a mistake when shifting at the end of the opening lap and hence I lost the lead again. After that, overtaking proved to be difficult, even though my car was really good. This weekend, conditions are changing all the time, but the team always had the right answer.”

George Russell (HitechGP): “I managed to move up into third place at the start, but I was left without a chance against the two Prema drivers. They were simply quicker and thus also deserved the first two places. However, I feel slightly sorry for Nick, because he was faster than Lance, but had to let him get past in the opening stage of the race already. Personally, I am happy with my third place, especially as my tyres degraded heavily in the second half of the race. Both for me and for my team HitechGP, this is the first time at Le Castellet and the team has done a great job.”