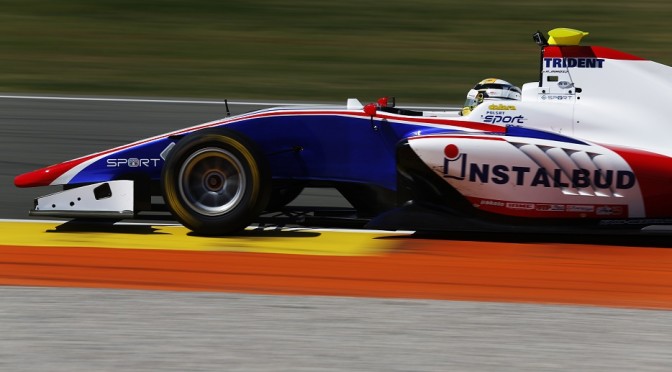 JANOSZ FASTEST ON DAY ONE IN VALENCIA

Trident driver leads the way at second pre-season test in Spain
Trident’s Artur Janosz recorded the best time on day one of pre-season testing in Valencia with a 1:21.755 which was set in the morning session. Koiranen GP’s Matthew Parry topped the afternoon times in a 1:21.932 at Circuit Ricardo Tormo.
The second pre-season test of the campaign opened under clear blue skies. There was one change to the driver line-up compared to the first pre-season test with newly announced Richard Gonda from Slovakia driving for Jenzer Motorsport.
DAMS’ rookie Jake Hughes was first on track but it was Akash Nandy from Jenzer who first lapped into the 1m23’s. DAMS and Haas F1 Team development driver Santino Ferrucci found some extra pace to dip into the 1m22’s before Oscar Tunjo rose to the top of the timesheet in a 1:22.029. There was a short break in proceedings when Parry stopped on track.
At the midway point, the Colombian continued to lead the standings with Campos Racing’s Alex Palou and ART Grand Prix’s Nyck de Vries within one tenth. Arden International’s Jack Aitken shot to second before Janosz rocketed into the 1m21’s to top the session with just over 30 minutes remaining. Charles Leclerc jumped into P2 before his teammate Alexander Albon displaced him. Konstantin Tereshchenko improved to third as the clock ticked down.
Janosz remained unchallenged as the morning test session came to a close ahead of Albon, Tereshchenko, Leclerc, Tunjo, Aitken, Palou, de Vries, Tatiana Calderon and Giuliano Alesi.
Following the two hour break for lunch, the temperature increased and Leclerc was first to set the pace. The Arden duo of Jake Dennis and Aitken led the way for the majority of the afternoon – separated by just 0.027s. The session was studious with the drivers focusing on long runs.
In the final thirty minutes, Parry shot to the top of timings and was first into the 1m21s. At the chequered flag the Brit remained P1, two tenths ahead of fellow compatriot Dennis. Aitken, Nirei Fukuzumi, Leclerc, Albon, Tunjo, Steijn Schothorst, Ferrucci and Matevos Isaakyan completed the top ten.