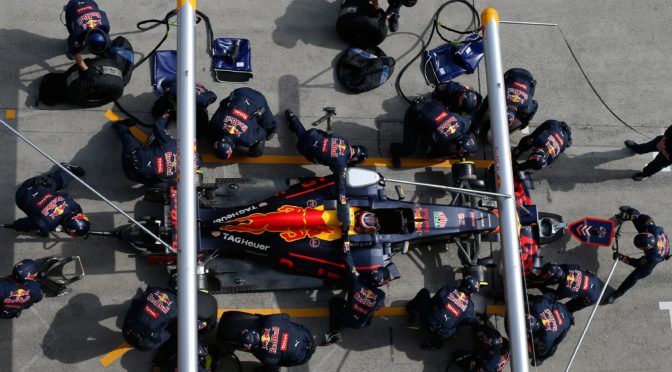 DANIIL KVYAT, Finish Position: 3rd, Start Position: 6th
“I really enjoyed the race today. Our pace was very strong and to get this result at this track where we didn’t expect to be so strong is really great. The car is performing really well, the chassis is easy to drive and with further upgrades coming to the power unit, we should be in an even stronger position. I think it was a fair move on Vettel. I saw the gap and I went for it. We didn’t touch, unfortunately for him, Kimi was on his other side. For me it was a logical move and it paid off with a podium. It’s a nice boost for our side of the garage after a couple of tricky races. It’s also good for the team to be consistently fighting for podiums this year. It’s very encouraging for the season. I’m a very happy man today and it’s nice to carry this feeling heading into my home grand prix in Russia.”
DANIEL RICCIARDO, Finish Position: 4th, Start Position: 2nd
“I think there were some incidents on the first lap and I remember on my second lap there was a little bit of debris here and there. But it didn’t seem like there was one big bit which I caught so it was still unexpected when I was coming through Turn 11 and 12 and was feeling the rear start to slide so I just came on the radio straight away to let them know the tyres were gone. The puncture became noticeable when I got on the straight as I could feel the car start to wobble and then my tyre went. Then the safety car put us even further back so that was like a double whammy, which felt like getting punched in the stomach by a heavy weight. But in the end the second part of the race I drove probably one of the best races of my life. The package is really promising for sure. Right now, three races in every weekend we’ve shown our strength at some point and it’s been a strength we didn’t think we’d have this early in the season, so it definitely feels more like 2014 when we had potential. I felt like I would have sprayed champagne today and part of me is smiling because I am optimistic that will happen this year so that’s a really good feeling and I’ll keep fighting.”
CHRISTIAN HORNER, Team Principal: “It’s been a great day for the team, especially after that unfortunate start. For Daniel to take the lead and then get that puncture was desperately unlucky after he hit some debris. The safety car then came out at exactly the wrong time for him and put him on the back foot, but it was a fantastic recovery drive. Dany took up the baton and drove a fantastic race, racing with Sebastian for a large part of the race to achieve his second podium. A third and fourth place finish, lots of constructors points so yes, a great day for the team.”