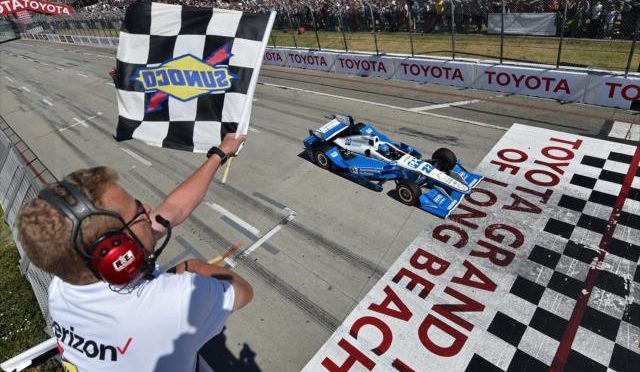 Simon Pagenaud has knocked on the door of victory lane in each of the first two races of the 2016 Verizon IndyCar Series season. Today at the 42nd Toyota Grand Prix of Long Beach, the Frenchman broke through to earn the win.

Pagenaud, in the No. 22 PPG Automotive Refinish Chevrolet, edged reigning series champion Scott Dixon across the finish line by 0.3032 of a second, the closest finish in the 33 Indy car races held at Long Beach and the fastest ever with an average speed of 100.592 mph. It gave Pagenaud five career Verizon Indy Car Series wins and his first since joining Team Penske in 2015.

Pagenaud, who finished second in each of the first two races this season, takes a 14-point championship lead over Dixon into the next event, the Honda Indy Grand Prix of Alabama at Barber Motorsports Park on April 24 (3 p.m. ET, NBCSN).

“This is my favorite street course,” said Pagenaud, a two-time winner in sports car races on the 1.968-mile temporary street course, but who took his first Indy car victory here today. “To win here, especially in INDYCAR, given the level of competition, is amazing. The PPG car is good luck on me. Every time I’m in that car, I’m on the podium.”

Starting the 80-lap race third, Pagenaud took his first lead on Lap 52 when teammate and pole sitter Helio Castroneves made his final pit stop. Pagenaud was able to push two laps farther before stopping for fuel and tires, exiting the pits just ahead of Dixon and Castroneves.

INDYCAR race stewards warned Pagenaud for improper lane usage exiting the pits, but he was able to lead the final 25 laps to collect the win in the first Verizon IndyCar Series caution-free race since Mid-Ohio in August 2013 and the first completely green-flag race on the often-chaotic streets of Long Beach since 1989.

Dixon, in the No. 9 Target Chip Ganassi Racing Chevrolet, believed Pagenaud should have been assessed a stronger penalty, but was resigned with the runner-up finish that kept him second in the standings. Pagenaud leads with 134 points after three of 16 races, Dixon has 120 and Team Penske’s Juan Pablo Montoya is third with 106.

“It appeared that Simon turned a little early and crossed the line (exiting the pits) that you’re not meant to cross,” Dixon said. “But it is what it is, so second place today and Team Target did a hell of a job.”

Castroneves finished third in the No. 3 Auto Club of Southern California Chevrolet, leading a race-high 47 laps. Montoya finished fourth in the No. 2 Verizon Team Penske Chevy after a frenetic late-lap battle with Takuma Sato, who wound up fifth in the No. 14 ABC Supply AJ Foyt Racing Honda.

Pagenaud finished 11th in last year’s standings, in his first season with Team Penske, with best finishes of third at Belle Isle-1 and Mid-Ohio. Despite going winless in 2015, he focused on the long-term plan.

“I knew it was coming because we’ve been so competitive since the beginning of the year,” Pagenaud said. “I knew I could win races. It’s not my first win; I’ve been around. It was just a matter of when and it’s when we were going to put ourselves in that position.”