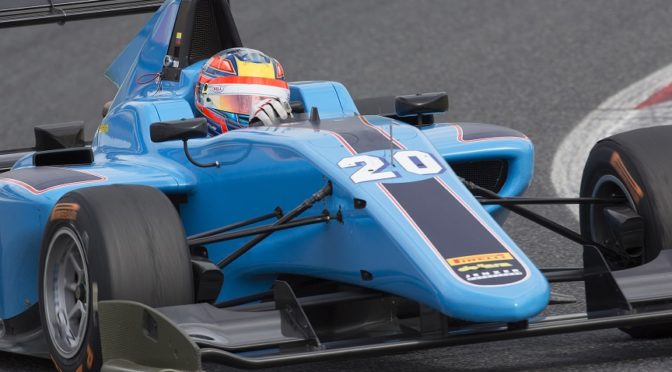 TUNJO TOPS DAY ONE IN BARCELONA

Jenzer Motorsport driver sets early pace in Spain
Oscar Tunjo posted the quickest laptime on day one of pre-season testing in Barcelona. The Colombian’s lap of 1:33.554 was two tenths quicker than the GP3 lap record at the Circuit de Catalunya set with the previous generation car back in 2013. The Jenzer Motorsport driver clocked this time in the morning session. In the afternoon, ART Grand Prix and Ferrari Driver Academy rookie Charles Leclerc headed the timesheet.
Dry and cloudy conditions greeted the paddock for the morning session with DAMS’ Santino Ferrucci first to lap in the 1m34s. It was a busy start to proceedings with the drivers and teams keen to focus on performance and qualifying simulations ahead of Round 1 on this very track in just three weeks’ time.
Tunjo shot to the head of timings early on, followed by Antonio Fuoco (Trident). At the midway point, Fuoco led the way ahead of Tunjo, Alex Palou, Giuliano Alesi and Matthew Parry.
In the final hour, Tunjo found some extra pace to dip into the 1m33s. Fuoco and Ralph Boschung also joined the Colombian in the 1m33’s, though a few tenths shy. There was a red flag at the end of the session when Sandy Stuvik went off into the gravel bed at Turn 9. The session wasn’t re-started.
At the chequered flag, Tunjo remained in P1 ahead of Fuoco, Boschung and Parry. Jack Aitken, Tatiana Calderon, Charles Leclerc, Matevos Isaakyan, Nirei Fukuzumi and Alex Palou completed the top ten.
Following a two hour break for lunch, the sun made a welcome appearance. Jake Hughes (DAMS) was first to set the pace before Campos Racing’s Steijn Schothorst broke into the 1m35s to lead the session at the midway point. There was a brief stoppage in proceedings when Jake Dennis stopped on track.
Once the session resumed, the majority of the drivers were concentrating on race runs. Leclerc rose to the top of timings with Schothorst two tenths adrift. Some teams opted for new Pirelli rubber with positions changing frequently in the final hour. Hughes managed to get within 0.031s of the Monegasque’s best laptime to move up to P2 before a third red flag period when Parry stopped at Turn 8.
There was just time for a final dash once the track was green; Palou jumped up to third demoting Ferrucci to fourth but Leclerc remained P1 at the chequered flag. Hughes, Palou, Ferrucci, Schothorst, Alexander Albon, Tunjo, Fukuzumi, Nyck de Vries and Konstantin Tereshchenko rounded out the top ten.
Koiranen GP’s Mahaveer Raghunathan did not participate during today’s test as he was unfit.