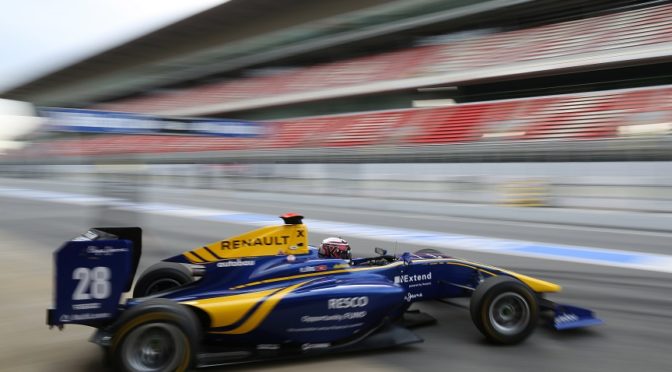 DAMS rookie fastest on second day in Barcelona
DAMS and Renault Sport Academy’s Kevin Jörg was quickest overall on the second and final day of pre-season testing today at the Circuit de Catalunya in Spain. The Swiss set his time in the afternoon session and finished one tenth ahead of his teammate Jake Hughes. ART Grand Prix’s and Ferrari Driver Academy’s Charles Leclerc posted the quickest time in a very wet morning session.
Heavy rain greeted the paddock but that did not deter the field from testing in the difficult conditions. Some of the teams chose to work on their wet set up ahead of the opening round on that same track next month. The ART Grand Prix quartet were keen to get some laps under their belt as were the DAMS trio with Leclerc setting the initial pace.
There was an early red flag when Jenzer Motorsport’s Oscar Tunjo spun at Turn 1. The rain began to hammer down with more intensity so the drivers remained in their garages. In the final hour, a handful of drivers ventured on track with Alexander Albon demoting Leclerc to P2 as he got to grips with the conditions. However, Leclerc soon retaliated and was back into P1 by 1.7s.
Nyck de Vries made a visit to the gravel bed at Turn 5 in the final hour, but prior to this Albon had split the ART pairing to jump into second. Jörg and Tereshchenko found some extra pace in the final minutes to go P2 and P3 respectively. The session was brought to an end when Jake Hughes also had an excursion at Turn 5.
At the chequered flag, Leclerc headed the timesheet in front of Jörg, Tereshchenko, Albon, Jack Aitken, Nirei Fukuzumi, Santino Ferrucci, de Vries, Akash Nandy and Richard Gonda.
During the one hour lunch break, the rain finally stopped and blue skies appeared. The drivers all filtered out onto the track eager to get a taste of the changing conditions. By the midway point, the drivers had switched to the slick Pirelli compound as the track continued to dry. Ferrucci held P1 half-way through the session, before Gonda and Tunjo both improved to head the timings.
Koiranen GP’s Matthew Parry was first to dip into the 1m36s, but Antonio Fuoco and then Fukuzumi bettered the Brit’s time by one tenth. Jörg broke into the 1m35s with 25 minutes left on the clock, with his teammate Hughes lapping one tenth shy.
At the chequered flag, the DAMS duo remained on top – ahead of Fuoco, Alex Palou, Leclerc, Artur Janosz, Albon, Fukuzumi, Ralph Boschung and Tunjo.
Koiranen GP’s Mahaveer Raghunathan did not participate during today’s test as he was unfit.
GP3 Series will be on track again next month for the eagerly-awaited first round in Barcelona on May 13-14-15 2016.