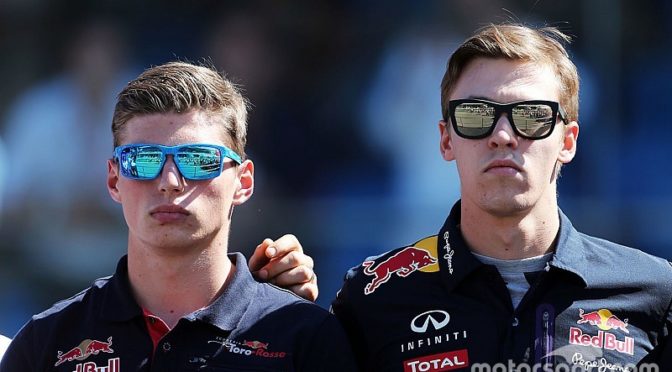 Red Bull have dropped Daniil Kvyat and replaced him with Max Verstappen for the remainder of the Formula One season.

Verstappen, 18, who made his debut last year as the sport’s youngest ever driver, makes the move up from Red Bull’s junior team Toro Rosso following Kvyat’s display at his home race in Russia.

Verstappen will team up with Daniel Ricciardo at Red Bull from next week’s Spanish Grand Prix, with Kvyat, 22, moving in the other direction and rejoining Toro Rosso to partner Carlos Sainz.

“Max has proven to be an outstanding young talent,” the Red Bull team principal Christian Horner said in a statement released on Thursday.

“His performance at Toro Rosso has been impressive so far and we are pleased to give him the opportunity to drive for Red Bull Racing.

“We are in the unique position to have all four drivers across Red Bull Racing and Toro Rosso under long-term contracts with Red Bull, so we have the flexibility to move them between the two teams.

“Dany will be able to continue his development at Toro Rosso, in a team that he is familiar with, giving him the chance to regain his form and show his potential.”

The Russian thumped into the back of Vettel at turn two before crashing into him again moments later. The force of the second impact sent Vettel spinning into the wall, ending his race, and causing the German to launch an extraordinary expletive-fuelled rant over the team radio. Vettel immediately stormed into the Red Bull garage and began berating Horner, his former principal at Red Bull.