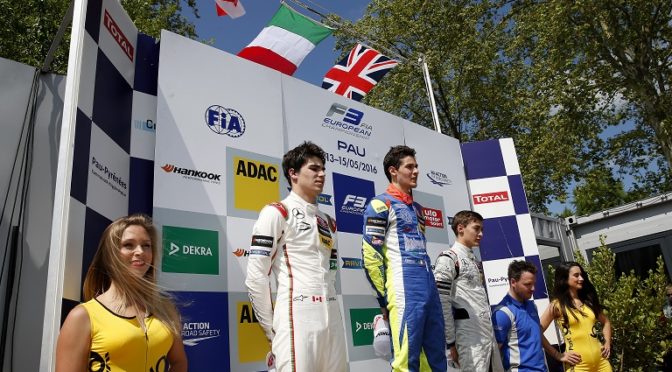 In bright sunshine at Pau in the south of France, Alessio Lorandi (Carlin) claimed his maiden FIA Formula 3 European Championship race win. The Italian led from the first till the final lap at the 2.76 kilometres long street circuit at the foot of the Pyrenées and thus also secured the first win of his team Carlin in the 2016 FIA Formula 3 European Championship. Lance Stroll (Prema Powerteam) crossed the finish line of the prestigious Grand Prix de Pau, one of the world’s most important Formula 3 races, in second place from George Russell (HitechGP) and thus took over the lead in the drivers’ standings.

Right after the start of the race, Nick Cassidy (Prema Powerteam) and Sérgio Sette Câmara (Motopark) collided. Some of the drivers who followed were unable to avoid the two, resulting into the retirement not only for Cassidy and Sette Câmara, but also for debutant David Beckmann (kfzteile24 Mücke Motorsport) and Zhi Cong Li (Carlin). Nikita Mazepin (HitechGP) headed into the pit lane after one lap and also had to retire. After the accident, the safety car was deployed and the race was neutralised until the end of lap five.

At the restart on lap six, Alessio Lorandi stayed in front, but Lance Stroll was right behind him and waited for the Carlin protégé to make a mistake. Initially, the two were able to pull clear from third-placed George Russell. While the positions out in front remained unchanged, the best-placed rookie Joel Eriksson (Motopark) overtook Ryan Tveter (Carlin) on lap nine to take sixth place.

Alessio Lorandi (Carlin): “It was a very good day for me, because I have won the Grand Prix de Pau! We had already done a good job in qualifying, allowing me to start the race from pole position. At this track, that is extremely important, because one can hardly overtake here. Admittedly, my start wasn’t fantastic, but it was enough to take the lead. After the safety car, Lance kept me under pressure, but I didn’t make any big mistakes and I managed to stay ahead of him until the finish. Now, I hope that this victory will not remain the only one for me and that I will still be able to be a contender in the battle for the title.”

Lance Stroll (Prema Powerteam): “My start was good, but Alessio did what he had to do to stay in front. Throughout the race, I was within striking distance and I was a little bit faster, but he didn’t make any mistakes. Had he made one, I would have been ready for an attack, but I didn’t want to take any unnecessary risks and rather settled for the points for third place. Congratulations to Alessio for this victory! I reckon, the race wasn’t easy for him, especially as it was his first time in the lead. He has done a good job.”