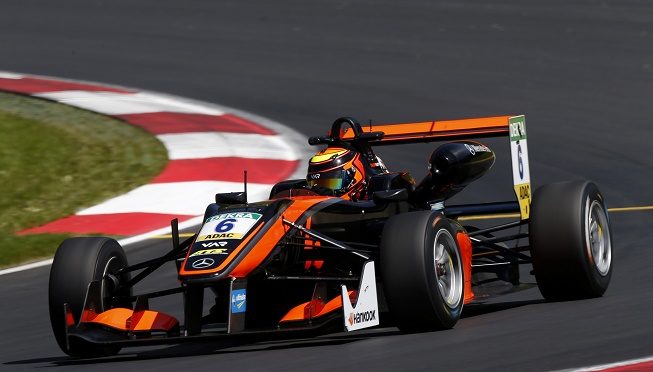 Callum Ilott took the lead at the start, but had to defend his position from a charging Maximilian Günther. The two youngsters having battled for the lead on the opening lap, Ilott eventually came out in front before the safety car was deployed for the first time following an accident involving Ryan Tveter, Arjun Maini (ThreeBond with T-Sport) and Weiron Tan (Carlin) on the opening lap.

After the restart, Ilott stayed in front while both Stroll and Mikkel Jensen (kfzteile24 Mücke Motorsport) managed to overtake Günther, the German dropping back to fourth. A little bit later, however, Günther countered against Jensen and moved back up into the top three again. Meanwhile, Pedro Piquet had to come in from fifth place for a drive through penalty following a jump start and dropped back considerably. Nick Cassidy (Prema Powerteam) inherited fifth place.

On lap 17, the race was stopped after an accident involving Ryan Tveter, Zhi Cong Li and Pedro Piquet. Tveter had spun through the gravel trap and returned onto the track where Li, unable to see Tveter’s car due to the dust that was whirled up, hit the American’s race car almost at full speed. The upcoming Piquet was unable to avoid the two, but the Brazilian escaped unscathed. Tveter and Li incurred injuries and were taken to hospital for further examination. The race was stopped immediately.

Callum Ilott (Van Amersfoort Racing): “I had a good start, but Maximilian was able to overtake me on the opening lap. After he had made a mistake, I managed to get past him again. Right after this overtaking move, the safety car was deployed. After the restart, I tried to pull a gap and to avoid any mistakes. Of course, this victory is a great result. However, it is even more important that Ryan, Zhi Cong and Pedro hopefully are okay.