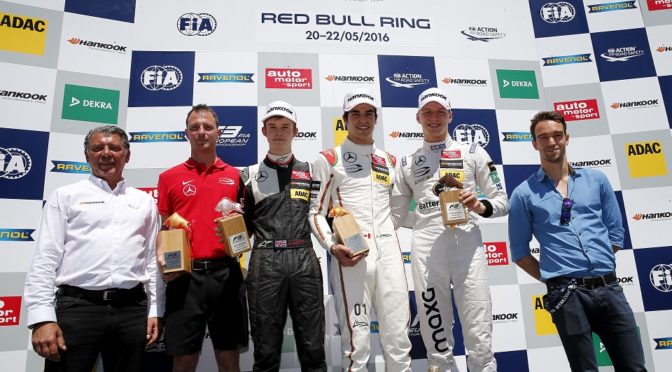 For Lance Stroll (Prema Powerteam), his second victory at the 4.326 kilometres long Red Bull Ring also was his third race win in the 2016 FIA Formula 3 European Championship. Behind the 17-year-old Canadian, equally old British driver Callum Ilott (Van Amersfoort Racing) took the flag in second place while 18-year-old German Maximilian Günther (Prema Powerteam) was classified third in the twelfth race of the FIA Formula 3 European Championship season. Stroll is heading home from Styria as the leader in the drivers’ standings, he is now 38 points ahead of second-placed Ilott.

Starting from pole position, Lance Stroll managed to hold on to first place at the start and led Callum Ilott and Niko Kari (Motopark) into the first corner. David Beckmann (kfzteile24 Mücke Motorsport) also found himself among the front runners, but then dropped back to the end of the field following a collision with George Russell (HitechGP) and the subsequent spin. Due to the accident, Russell retired in the pits. On lap three, Mikkel Jensen (kfzteile24 Mücke Motorsport) and Alessio Lorandi (Carlin) retired. After that, Jensen’s race came to an end in the gravel trap and the safety car was deployed.

After the restart, Stroll remained in front from Ilott while Kari was involved in a hard fight with the drivers behind him. The Finnish rookie driver eventually had to admit defeat to Maximilian Günther in the battle for the final podium slot. Ben Barnicoat (HitechGP), Joel Eriksson (Motopark), Sérgio Sette Câmara (Motopark) and Harrison Newey (Van Amersfoort Racing) also overtook Kari at this stage of the race. Red Bull junior driver Sette Câmara overtook his Swedish team-mate for fifth soon after that. Out in front, Lance Stroll drove an undisputed victory home. Callum Ilott and Maximilian Günther joined him on the podium, Ben Barnicoat finished fourth as the best-placed rookie driver, but lost this position due to overtaking under safety car to Sette Câmara. The Briton was classified fifth from Eriksson, while Guanyu Zhou (Motopark), Kari, Ralf Aron (Prema Powerteam) and Nick Cassidy (Prema Powerteam) were in seventh to tenth place.

Lance Stroll (Prema Powerteam): “The race wasn’t as easy as it perhaps looked from the outside, because there are always possibilities to make mistakes. For instance, I had to be careful at the start. At the restart and in the first few free laps, it would have been easy to make mistakes. However, it all went well. Initially, I tried to build up an advantage and then keep it without taking any risks. All in all, I had a fantastic weekend with two victories and one second place at the Red Bull Ring.”