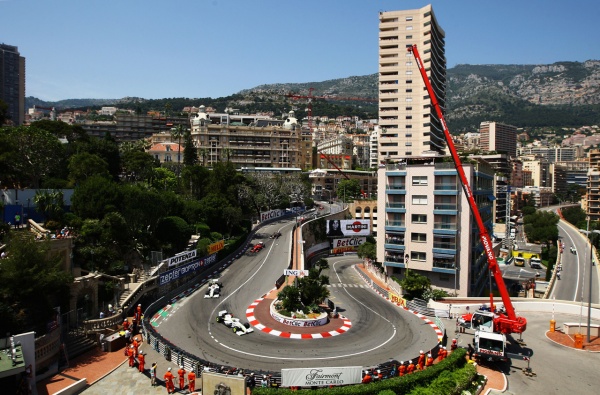 The jewel in Formula One’s crown, winning the Monaco Grand Prix earns a driver respect like no other. At little over two miles, the shortest lap on the calendar is also one of the most challenging. To drive on the absolute limit for two hours, persisting with lines not more than millimetres from the barriers without conceding a single mistake, is a task former Williams driver Nelson Piquet once compared to trying to race a bicycle around your living room. It’s not by chance that some of the sport’s greatest names, such as Graham Hill, Ayrton Senna and Michael Schumacher were masters of the principality. Williams’s last victory in Monte Carlo was delivered by Juan Pablo Montoya in 2003.
For Monaco, Pirelli have made available the soft, supersoft and ultrasoft tyres. This will be the debut of the ultrasoft tyre this season. Williams has chosen to allocate each driver with the same sets of tyres. Felipe and Valtteri will have two sets of soft tyres, four sets of supersoft tyres and seven sets of ultrasoft tyres available throughout the weekend.
Pat Symonds
The Monaco circuit is perhaps the most challenging we visit all year, both in terms of car set-up and for the drivers. While we always think of Monaco as a high downforce track, most circuits these days are. What is far more important here is to get a good chassis balance through corners that are generally slower and have a very different surface to those we meet on conventional race tracks. 2016 also sees the introduction of the new ultrasoft tyre. With overtaking difficult at Monaco, there will be a need to get the maximum potential out of the tyre for a good grid position, while managing tyre consumption to have the option of doing a one-stop race. The forecast is for a dry weekend, but one can never rule out rain in Monaco as onshore winds and high hills above can produce a microclimate. We can’t hide from the fact that our performance last year was well below par, and a lot of analysis has gone into determining why. Our hopes for this year, as always, will be to get both cars in good grid positions and race strongly from there.
Felipe Massa
Monaco is like another home grand prix for me because I live there. I’m not from Monaco, but it’s definitely my town. I pass through the track most of the time when it’s just a road, and then suddenly everything changes and in just a few months it turns into a race track. It’s pretty amazing to see what they do there with the tight roads, and then we go racing there at 300kph. It’s always a very difficult race. It’s very easy to lose your concentration and hit the wall. It’s a very important race for us as drivers, but also for people to enjoy from their boats in the glamourous setting of Monaco. It’s always a really nice weekend for so many people and not just the drivers. I’m really looking forward to an amazing weekend, and some good racing at one of my home grands prix.
Valtteri Bottas
Monaco is a unique grand prix and really challenging as a track for the drivers, especially mentally, as you have to keep focussed for the whole race distance and a good qualifying lap is crucial. It’s a nice feeling when you do a neat lap there. It’s a very busy week – it starts one day earlier than normal, because practice is on Thursday. Normally there are plenty of partners who come to Monaco for lots of events, so it’s probably the busiest race weekend off the track for me as a driver. It’s a big challenge. I’m still missing my first points in Monaco, so I’m looking forward to being able to achieve that. It’s kind of like a home race as well, as I live there. It’s nice being able to either walk or scooter to the paddock!