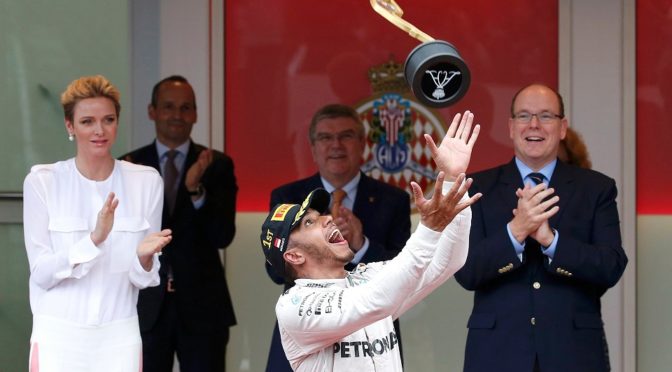 Ricciardo had led the early stages from pole position in wet conditions, only losing the lead when he pitted for intermediate tyres while Hamilton persisted with wets.

The Australian turned his deficit to dust as the track continued to dry and appeared poised to charge back into the lead as the pair pitted on consecutive laps for dry tyres.

While Hamilton’s stop went smoothly Red Bull weren’t ready when Ricciardo arrived a lap later, the team blaming a miscommunication that left their driver sitting in the pits waiting for the right tyres to arrive from the garage.

It felt like an eternity but the wait was only a few seconds – enough to allow Hamilton to narrowly regain the lead.

Despite several attempts, including one investigated by the stewards, Ricciardo was unable to find a way back past the Mercedes and watched helplessly as a weekend he’d dominated turned into a Hamilton victory.

He was furious with the team after the race, bluntly rebutting an attempted apology.

DANIEL RICCIARDO: “On the extremes in the beginning we were quick and I did everything I had to. I asked a couple of times how the people on inters were doing but they said that my pace was really good on the extremes so we stayed out and that was no problem. And then they said “box this lap”. We put the inters on and then we came out behind Lewis. Then when Lewis pitted we tried to pit the lap later to overcut him. It was all prepared and then I came into the pits and there were no tyres.
I actually hate being like this. I hate being miserable. I got a podium in Monaco. I should be extremely happy, grateful and thankful. I’ve been fast now for two races and that’s the positive, but again no win so I’m a little bit sick of being fast and not getting any real rewards. I don’t like being the sad story. To end it on a positive note, we are fast in all conditions, which is good.”