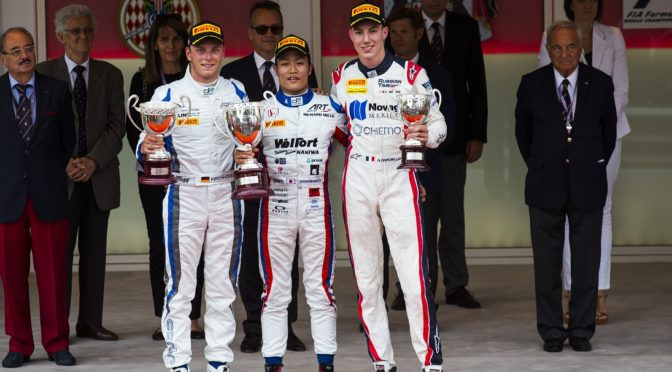 MATSUSHITA STORMS TO VICTORY AT MONACO

Japanese driver fourth winner of 2016
Nobuharu Matsushita has claimed his first win of the season with a stunning display of power and precision to dominate his rivals in this afternoon’s sprint race in Monaco, leading from lights to flag ahead of Marvin Kirchhöfer and Raffaele Marciello.
The Japanese driver became the fourth winner from as many races in the 2016 season, with the victory set up at the start: Matsushita was slightly slow off the line as the lights went out but pole position gave him a better line into Ste. Devote than Kirchhöfer, who was faster away from the front row but was unable to capitalise into the first turn.
Behind them Marciello boxed in a fast starting Mitch Evans, with Norman Nato sliding inside Oliver Rowland but unable to get by Alex Lynn as the field stormed up the hill towards Casino: yesterday’s winner Artem Markelov was soon all over Rowland’s rear wing, but was unable to replicate his overtaking prowess against the Briton.
With a huge battle shaking out for the minor points positions Matsushita just pulled away to leave them to their own devices, with the rest of the field unable to compete on pace. A VSC period to remove Sean Gelael’s stricken car from the Ste. Devote barriers did nothing to halt the Japanese driver’s progress, and when teammate Sergey Sirotkin ground to a halt at Casino ART was able to concentrate 100% on what mattered: claiming the win at this fabled circuit.
Matsushita seemed able to claim the fastest lap at will, with only Nato able to compete on pace but with too much traffic to do much with it. The pair traded fast laps as the clock wound down, but there was only ever going to be one result: Matsushita grabbed the fastest lap bragging rights along with a stunning victory by over 13 seconds from Kirchhöfer and Marciello, with Evans crossing the line a lonely fourth, well ahead of a train comprising of Lynn, Nato, Rowland and Markelov, all of whom must have been cursing the lack of overtaking opportunities on the tight, twisty circuit.
At least Nato could raise a smile after regaining the lead in the drivers’ title from Markelov, 49 points to 48, with Lynn on 41, Pierre Gasly unable to add to his Barcelona haul on 33, and Marciello on 28 ahead of Matsushita and Rowland 22 points each, while RUSSIAN TIME leave the principality at the top of the teams’ standing on 76 points from Racing Engineering on 65, DAMS on 61 PREMA Racing on 35 and Carlin on 28 points as they prepare for the debut race in Baku 3 weeks hence.