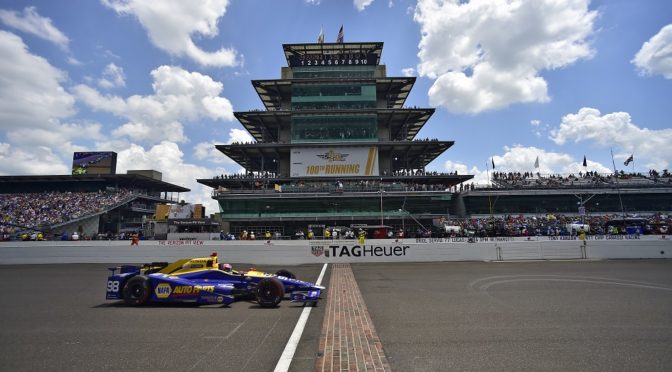 INDIANAPOLIS (Sunday, May 29, 2016) – On the biggest motorsports stage imaginable, Alexander Rossi picked the perfect day to make unimaginable history before a sellout crowd at Indianapolis Motor Speedway as a worldwide television audience tuned in.

The 24-year-old Californian and Verizon IndyCar Series rookie literally coasted across the finish line to win the epic 100th Running of the Indianapolis 500 presented by PennGrade Motor Oil in most memorable fashion.

Driving the No. 98 NAPA Auto Parts/Curb Honda, Rossi stretched his last tank of fuel over the final 36 laps around the hallowed 2.5-mile oval, running dry of Sunoco E85R as he entered Turn 4 on the final lap. The car’s momentum was enough to carry Rossi across the finish line 4.4975 seconds ahead of teammate Carlos Munoz.

In the process, Rossi became the 10th rookie in Indianapolis 500 history to win the race and the first since Helio Castroneves in 2001. He became a Verizon IndyCar Series winner in just his sixth race and the first to win a race in his debut season since Carlos Huertas in 2014.

“I have no idea how we pulled that off,” a stunned Rossi admitted in Victory Circle after drinking and then pouring the celebratory bottle of milk over his head. “We struggled a little bit in the pit stops but Bryan (Herta) came up with an unbelievable strategy. I can’t believe we’ve done this!”

In yet another thrilling Indianapolis 500 that saw 13 drivers swap the lead 54 times – the second most changes in Indy 500 history (68 in 2013) and seventh most for any Indy car race – Rossi led just 14 laps. The majority of the field, including Rossi, stopped for fuel and tires on Lap 164 during the caution period caused when Takuma Sato’s No. 14 ABC Supply AJ Foyt Racing Honda made light contact with the Turn 4 wall.

Rossi sat seventh on the Lap 167 restart and bided his time as those ahead of him began to peel off for a splash of fuel in the final 10 laps. When race leader Munoz had to stop four laps from the completion of the 200-lap event, Rossi inherited the lead and nursed his car home with help of a tow from another Andretti teammate, Ryan Hunter-Reay.

Rossi’s final lap averaged 179.784 mph, nearly 40 mph slower than the charging Munoz, but he had cushion enough to coast across the famous yard of bricks by the largest margin of victory since the 1996 race.

“This is unbelievable,” said Herta, whose team merged with Andretti’s this year to form Andretti Herta Autosport with Curb-Agajanian and field Rossi, who left the American open-wheel junior ranks for Europe and made five Formula One starts in 2015 before returning to race on home soil.

“Man, it was so close at the end,” added Herta, Rossi’s race strategist. “For a rookie to drive with the poise he did in such a tough situation – I was telling him, ‘Don’t let anybody pass you but save fuel’ – and he did it.”

Rossi’s deal with Andretti Herta wasn’t formalized until a few weeks before the 2016 season opener. His best finish before today was 10th at the Angie’s List Grand Prix of Indianapolis on May 14. Now Rossi is an Indianapolis 500 champion and he continues a trend of rookies winning landmark Indy 500s started by Ray Harroun at the first race in 1911 and Graham Hill at the 50th in 1966.

“I don’t even know where to begin,” Rossi said. “In February I wasn’t even thinking about Indy car, and now we’ve just won the Indy 500. Thanks to an amazing group of people who gave me an opportunity to come here this year.”