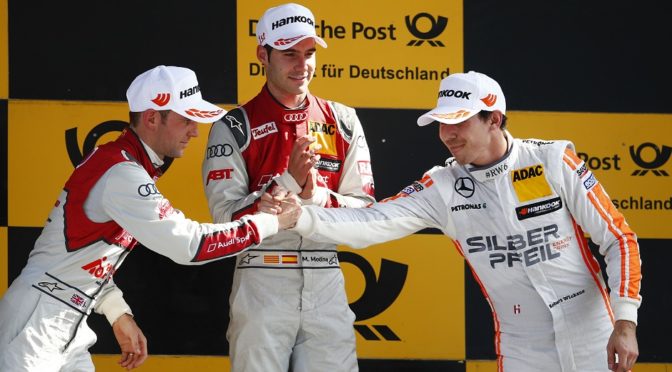 A 1-2 for Audi in the race on Saturday, Wittmann takes points’ lead

The Lausitzring seems to suit Audi: in the DTM race on Saturday, Miguel Molina and Jamie Green secured a 1-2 for the manufacturer from Ingolstadt. Last year already, the brand with the four rings was very successful, winning both races at Lausitz. Molina, who started from pole position, only had to allow his fellow Audi driver Green in front for a few laps after the start, but then managed to take back the lead and held on to it until the end. “Today, our car was very fast, both in qualifying and in the race, after things didn’t go particularly well for us in the first four races of the season,” winner Molina said after the race. For the Spaniard, it was his second DTM race win. After 32 laps, he was 2.034 seconds ahead of British driver Green. During the Motorsport Festival at Lausitzring, Mercedes-Benz driver Robert Wickens claimed the final podium slot by finishing third.

Even though Marco Wittmann just missed out on a podium finish with his BMW M4 DTM, the 2014 DTM champion can still be happy: twelve points for his fourth place are enough to take the lead in the drivers’ standings. After five of this season’s 18 DTM races, Wittmann is now on top with 47 points. Edoardo Mortara, who finished eighth in the race, is second with 44 points. Paul Di Resta’s progress, that saw him move up from 21st on the grid to 13th at the finish, remained unrewarded. The Scot lost the lead in the drivers’ standings and is now third with 43 points, tied with Robert Wickens.

On Sunday, the sixth race of the season takes place from 15.15 hrs. Live broadcast from Lausitz on ARD starts at 15.00 hrs. Qualifying on Sunday is scheduled at 11.30 hrs (live on Einsfestival from 11.25 hrs.).