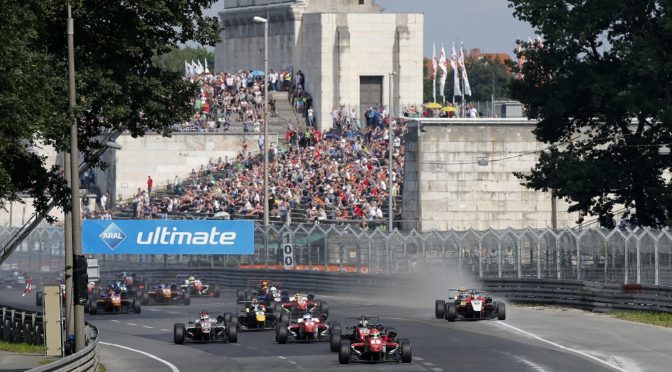 At the start, Lance Stroll took the lead, but he was under pressure from Joel Eriksson from the very beginning. On lap four, the Swede, who was announced as a new BMW Motorsport junior driver yesterday, mounted an attack on the Canadian and moved up into the lead. Meanwhile, Callum Ilott, who had to start the race from twelfth place following an engine change, moved up further and further through the ranks and had closed the gap to Eriksson and Stroll on lap 17. On lap 20, the Brit braked too late for the Grundig hairpin and collided with Eriksson, causing both drivers to retire. Stroll inherited the lead and the safety car neutralised the race for a few laps.

Soon after racing resumed, Sérgio Sette Câmara (Motopark) and Guanyu Zhou (Motopark) collided while battling for third place and retired as well. After this incident, the safety car was deployed for the second time. After the second restart, things didn’t go entirely as planned either. While Lance Stroll held on to his first place, Pedro Piquet (Van Amersfoort Racing) and Harrison Newey (Van Amersfoort Racing) collided while battling for tenth place. Thus, Newey’s race came to an early end.

Lance Stroll (Prema Powerteam): “My start was good, but after a few laps already, Joel Eriksson managed to overtake me. I have to admit that it really was a good move by him. Later, Callum Ilott closed up to the two of us, but he missed his braking point and collided with Joel. Like that, I inherited the lead, but I also felt sorry for Joel as there was nothing he could do about the incident. For me, this victory and the 25 points are great, of course.”

Niko Kari (Motopark): “Initially, I lost a few positions, but then my pace improved and I concentrated to getting further up to the front. This weekend, I am racing at the Norisring for the first time, but I found my way quickly. Perhaps, that is also thanks to the fact that we have race tracks like this in Finland as well.”