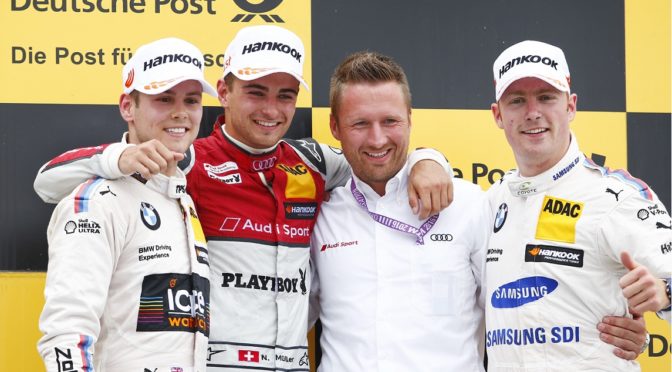 NICO MULLER SCORES HIS MAIDEN RACE VICTORY AT THE NORISRING

An emotional Sunday for Nico Müller: in the second race at the Norisring, the 24-year-old Swiss scored his maiden DTM race win. Having started from third place, Müller took the lead on lap 43 following a perfect pit stop by his Team and defended this position until the finish. After 72 laps of the only 2.3 kilometres long track, he crossed the finish line with a margin of 0.670 seconds from second-placed BMW driver Tom Blomqvist from Great Britain. Belgian Maxime Martin, another BMW driver, ended up third. In total, 123,500 spectators came to witness the DTM action in Nuremberg over the weekend. The Norisring is the only street circuit on the calendar of the popular touring car series.

“This can become addictive,” a buoyant Müller commented in his first interview. “Now, I want to be on the top step of the podium more often. My team laid the foundation for this victory with a perfect pit stop, many thanks to them.” Blomqvist wasn’t too upset about the fact that he hadn’t been able to convert his maiden DTM pole position into a race win. “To be honest, we didn’t expect such a good result at the Norisring. Therefore, I am happy, even though I am only in second place.”

Behind the trio in front, the two Mercedes-AMG drivers Paul Di Resta and Lucas Auer finished fourth and fifth, with local hero Marco Wittmann (BMW) coming home sixth. This result was enough for the 26-year-old to take the lead in the drivers’ standings after eight races. Wittmann is now on top with 75 points from Edoardo Mortara (73 points). The Audi driver only finished eighth in the race behind Bruno Spengler (BMW) and thus lost the points’ lead he only had secured on the previous day. Di Resta is third, with the first three drivers in the standings separated only by five points.

The result promises excitement for the remainder of the DTM season, with the next round scheduled at Zandvoort in The Netherlands, July 15 till 17. At the dune circuit, only a stone’s throw away from the North Sea Coast, the DTM will reach its halfway point with races nine and ten of the current season.