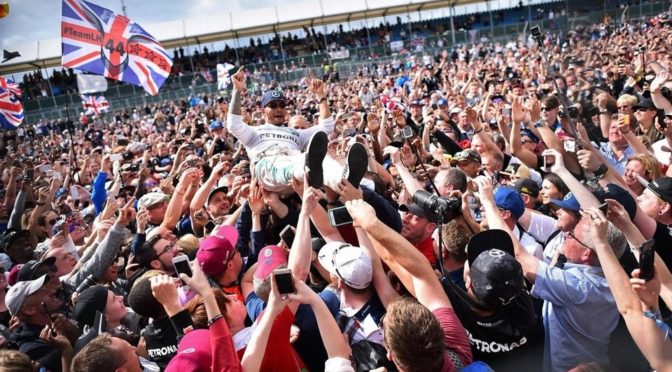 Lewis Hamilton has won the British Grand Prix before delighted home fans to make it a hat trick of victories at Silverstone.

The Briton led from a safety car start on Sunday for his fourth win of the season and the 47th of his career as he equalled Nigel Mansell’s British GP record of four wins, while Australia’s Daniel Ricciardo narrowly missed out on a podium finish.

After being soundly beaten in the race, Nico Rosberg was dealt a further blow by a post-race time penalty for breaking F1’s radio rules as his Mercedes team tried to help him with a gearbox issue. The penalty demoted Rosberg to third, pending an appeal.

Red Bull’s Max Verstappen, who was second in Austria, was back on the podium in what provisionally became second place, while teammate Ricciardo was fourth.

Ferrari’s Kimi Raikkonen was fifth, followed by Force India duo Sergio Perez and Nico Huelkenberg, Carlos Sainz in a Toro Rosso, Ferrari’s Sebastian Vettel and Daniil Kvyat in a Toro Rosso. A heavy shower shortly before the start caused a safety car start, and when the safety car went in on lap five several teams including Ferrari went straight into the pits for the intermediate tyres.