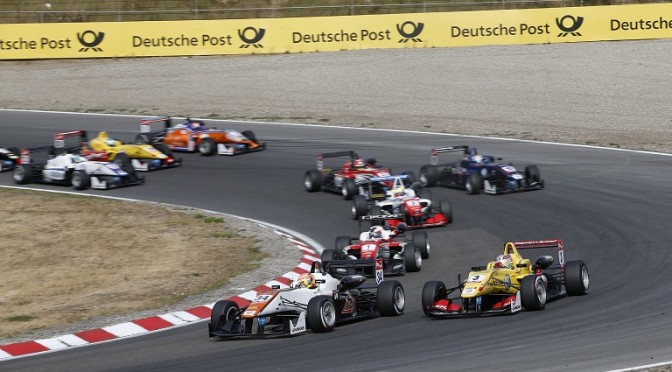 SUN, SEA AND ZANDVOORT: F3 BACK ON THE DUTCH COAST

With Lance Stroll (Prema Powerteam) having secured the unofficial FIA Formula 3 European Championship mid-season title in late June at Nuremberg’s Norisring, the 17-year-old Canadian and his rivals are about to contest the next race meeting this weekend. The 4.307-kilometre-long Circuit Park Zandvoort will stage the 16th, 17th and 18th race of the 2016 season. The only race meeting in the Netherlands this year also is the home event for Dutch team Van Amersfoort Racing that is represented – inter alia – by Callum Ilott one of the toughest rivals of Lance Stroll in the battle for the title.

The three races at Zandvoort represent the start into the second half of the season. Lance Stroll travels to the Netherlands with an 86-point lead over second-placed Maximilian Günther (Prema Powerteam). And Callum Ilott who scored just eight points less than the German in the 15 races contested to date, follows in third position.

Neither Stroll nor Günther or Ilott made it to the Zandvoort podium in 2015 but Stroll secured two top-five results. Meanwhile, Team Motopark succeeded in shining on the 2015 race weekend at the North Sea coast and celebrated the first race win in its first year of the FIA Formula 3 European Championship grid courtesy of Markus Pommer. This year, the Germany based squad convinced with the consistency of its well-balanced driver quartet. The three rookies Joel Eriksson, Guanyu Zhou and Niko Kari as well as the experienced F3 driver Sérgio Sette Câmara already made it to the podium, but the team around Team Principal Timo Rumpfkeil is still waiting for its first race win in 2016. Nonetheless, the squad holds third position in the team championship behind Prema Powerteam and HitechGP.

At Zandvoort, the FIA Formula 3 European Championship regulars once again will be joined by Weiron Tan (Carlin) who already raced for Carlin at the Red Bull Ring. The 21-year-old talent from Malaysia spent the past 18 months in US-American motor sport and, before that stint, had a successful time in the German ATS Formula 3 Cup. Just as it was the case in Austria, Tan once again will race the Dallara #19.

Callum Ilott (Van Amersfoort Racing): “Zandvoort is a great track that features both fast and slower sectors. It’s an old-school racetrack and driving here is real fun. Completing a perfect Zandvoort lap represents a true challenge for every driver. The race weekend at Zandvoort is the home meeting for my Dutch team, Van Amersfoort Racing and this represents an extra dose of motivation. It goes without saying that I want to score as many points as possible to close in on championship leader Lance Stroll. But I won’t be distracted by this, I will fully focus on myself to achieve the best possible results.”