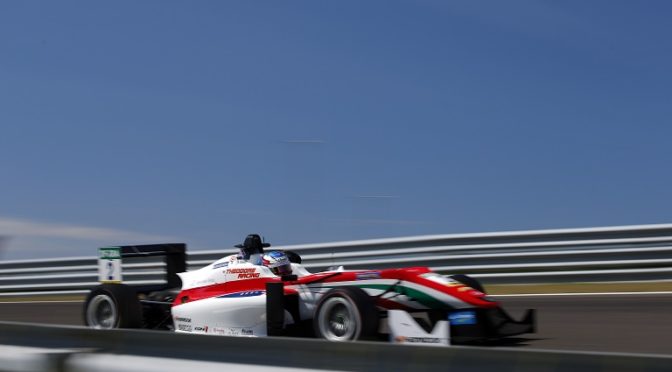 NICK CASSIDY ON POLE FOR THE FIRST TIME

New Zealand’s Nick Cassidy (Prema Powerteam, 1:28.533 minutes) was unbeatable in first qualifying of the FIA Formula 3 European Championship at the 4.307 kilometres long Circuit Park Zandvoort and claimed his first pole position of the season. Maximilian Günther (Prema Powerteam, 1:28.757 minutes) ended up second, 0.224 seconds behind his team-mate, followed by George Russell (HitechGP, 1:28.789 minutes). Lance Stroll (Prema Powerteam, 1:28.842 minutes), who came to the Dutch North Sea coast as the points’ leader, had to make do with fourth place.

At the start of the 20 minutes’ qualifying session, there hardly was a car on track. Nikita Mazepin (HitechGP. 1:29.582 minutes), George Russell and Pedro Piquet (Van Amersfoort Racing, 1:29.755 minutes) were the only ones to drive their laps. Only in the second half of qualifying, the other competitors also showed up on the track in the dunes and an entertaining battle for the positions up front followed. With five minutes remaining, Stroll lost first place to Günther, but the Canadian junior driver of the Williams Formula 1 team countered successfully and claimed back first place. This time, again, his joy didn’t last long either, because Cassidy posted an even faster lap time soon afterwards. While the New Zealander managed to maintain this position until the end of qualifying, Stroll even dropped back to fourth place behind Günther and Russell.

Nick Cassidy (Prema Powerteam): “My maiden pole position, I am really happy! My car was great from the very beginning. Initially, I was slightly worried because of possible tyre degradation, but I was able to post fast lap times nevertheless. I reckon that I could have been even slightly faster, which is a particularly good feeling for second qualifying later today.