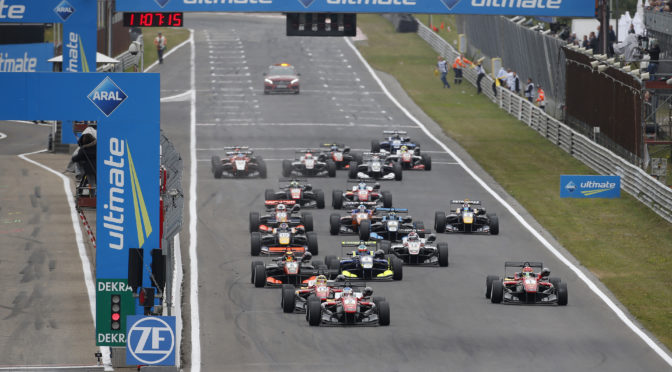 At the 4.307 kilometres long Circuit Park Zandvoort, Lance Stroll (Prema Powerteam) extended his FIA Formula 3 European Championship points’ lead with his sixth victory of the season. He has now 99 points more than his nearest rival, Maximilian Günther (Prema Powerteam). At the start of the race, the junior driver of the Williams Formula 1 team took the lead and drove an undisputed victory home. Nick Cassidy (Prema Powerteam) and Alessio Lorandi (Carlin) followed suit. For Italian driver Lorandi, it was his second podium in this year’s FIA Formula 3 European Championship after his victory in the prestigious Grand Prix de Pau in May.

Lance Stroll already laid the foundation for his victory at the start when, from fourth place on the grid, he took the outside line through Tarzan corer to overtake all his rivals and take the lead. Nick Cassidy, who had started the race from pole position, just managed to save second place on the first few metres from Alessio Lorandi, who used Stroll’s slipstream to move up into third place. Maximilian Günther slotted into fourth place from Callum Ilott (Van Amersfoort Racing) and the best-placed rookie, Niko Kari (Motopark).

In the following minutes, Stroll pulled clear from his main rival Cassidy with fast lap times, so that he had a margin of five seconds over his team-mate from New Zealand after nine laps. At this time, fifth-placed Callum Ilott made a slight error: he briefly came off the track and lost contact to Maximilian Günther. The Brit, who is racing for Dutch team Van Amersfoort Racing, quickly caught up again and continued to bide his chance to challenge the German for fourth. Until the finish on lap 23, Ilott tried again and again to overtake Günther, but the Prema driver defended his fourth place until the end.

Lance Stroll (Prema Powerteam): „”I knew that this race would be the only one this weekend in which I could score points, so I used my chance. At the start, I saw the gap on the outside, because Nick pulled over to the inside. Then, I braked relatively late and coming out of the corner, I was in front. Some five laps before the end, I then had a critical moment when a seagull flew over me so closely that I even had to pull my head in. This victory was very important to me, after I was excluded after second qualifying yesterday and have to start the next two races from the back as a result. Yesterday, we were all frustrated that my car didn’t comply with the technical regulations, but mistakes do happen.”

Nick Cassidy (Prema Powerteam): “I am lacking experience at this track, something I noticed at the start. I wanted to close the inside line, but I didn’t pay attention to the outside. Lance then simply caught me by surprise with his move on the outside. After that, I wasn’t able to match his speed and I concentrated on bringing second place home.”

Alessio Lorandi (Carlin): “At the start, I did the same manoeuvre as Lance and I was also able to make up places on the outside. I had already thought of pulling off such a move prior to the start and I was able to execute it just like that. After two rather poor race weekends, I managed to do better in qualifying here and I am now happy to be back on the podium.”