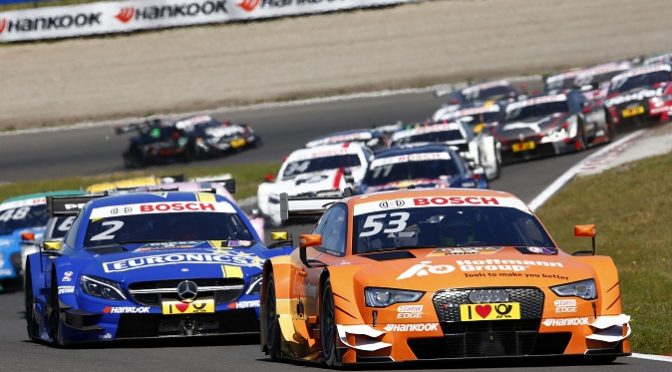 The DTM had a fulminant start of its second season half. With his Audi RS 5 DTM, Jamie Green emerged as the buoyant winner from the race at Zandvoort in The Netherlands that remained thrilling and dramatic until the end. In a dominant way, the Brit, who started from pole position, drove to his first win of the season and the 13th of his DTM career. “I am overjoyed that I finally have won here at Zandvoort,” Green said at the finish. “I had to wait many years for this victory. Today, everything worked out. After the fast pit stop, the second set of tyres was very good and I was able to pull clear from Robert and Gary.” After 39 laps, he crossed the finish line with a margin of 9.731 seconds from Mercedes-AMG driver Gary Paffett. For Paffett, this was the first podium finish of the season. Audi driver Edoardo Mortara crossed the finish line in third place. In total, 38,000 spectators witnessed the DTM weekend in the Dutch seaside resort in bright sunshine.

Until the 34th lap of the race, Robert Wickens, Gary Paffett, and Christian Vietoris were following behind Green. Especially for Wickens, second place would have been important in the battle for the DTM title as it would have enabled him to significantly reduce the gap to Wittmann. After a puncture on the left front tyre, the Canadian had to come in for an unscheduled pit stop and crossed the finish line in 16th place. Likewise, Christian Vietoris lost the third place he had inherited after Wickens’s problem due to a puncture.

Especially Marco Wittmann benefited from the bad luck of the two Mercedes-AMG drivers. The BMW driver finished fourth and defended his lead in the drivers’ standings, in which he now has 105 points. With his victory, Jamie Green moved up to second in the championship (98 points). Edoardo Mortara is third with 88 points. Meanwhile, Robert Wickens dropped from second to fourth and has 83 points to his tally after ten races.

After a five weeks’ summer break, the DTM will be racing at Moscow Raceway in Russia, August 19-21. Close to the Russian capital, the eleventh and twelfth race of the season will be held.