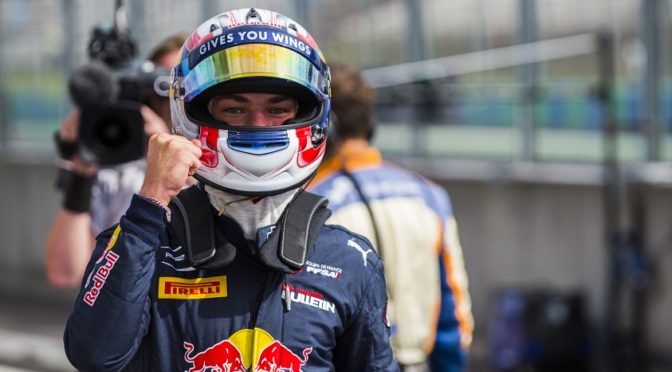 GASLY BURNS TO POLE IN BUDAPEST

Frenchman dominates Qualifying session
Pierre Gasly crushed his rivals’ hopes with a stunning performance in this afternoon’s Qualifying session at the Hungaroring, keeping cool in scorching conditions to run out of sequence and grab pole position ahead of Sergey Sirotkin and teammate Antonio Giovinazzi.

The Red Bull tester’s best time of 1:25.612 was more than half a second faster than anyone, with the Frenchman setting the two fastest laps of the session as his rivals floundered while they tried to find any improvement. The session opened with a cooler track but higher air temperatures than this morning’s Free Practice, and everyone except the PREMA Racing pairing were immediately out to take advantage of the F1 rubber.

The times were tumbling almost every time someone crossed the line, with Oliver Rowland then Alex Lynn then Nobuharu Matsushita and finally Sirotkin grabbing the top spot, leaving most of the field on their in-laps just as Gasly and Giovinazzi emerged on-track, handing the pair a largely clean circuit with which to work: they put it to good use, lining up P1 and P3 respectively, just as the DAMS teammates re-emerged to see what they could do with it.

Lynn looked like he had a good lap in the bag but ran wide at Turn 11, with Nicholas Latifi similarly wayward: the rest of the field came out and their gamble hadn’t paid out. ART Grand Prix were leading the way, with Sirotkin improving his time a little but still unable to challenge Gasly, who also returned to the circuit and beat his own time, rubbing salt into his rivals’ wounds: an even better lap was missed when the Frenchman ran a slightly wide at Turn 12 on his final tour, with the chequered flag bringing an end to their torture.

Behind the top three Matsushita leads Norman Nato, Luca Ghiotto, Arthur Pic, Raffaele Marciello, Jordan King and Marvin Kirchhöfer, all of whom will be burning the midnight oil to make sure that their race pace is better than their qualifying, so that they can look towards a podium in tomorrow’s Feature Race.