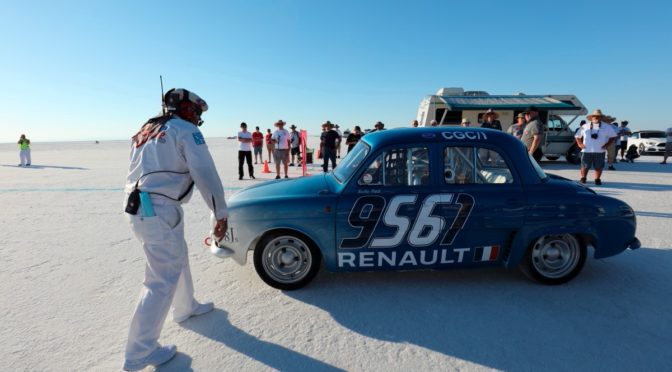 60 YEARS ON THE ETOILE FILANTE AND THE DAUPHINE TREAD ON AMERICAN SOIL AGAIN.

The Renault Etoile Filante* has returned to the Bonneville Salt Flats in Utah, USA, where, six decades ago, in August 1956, it famously clocked up a speed of 308.9kph to establish four new world records, two of which stand to this day.
Meanwhile, to celebrate the American career of the Renault Dauphine, which is also celebrating its 60th anniversary this year, Renault Classic dispatched a Dauphine to the Bonneville Speed Week (August 13-19) where Nicolas Prost established a new class record**, proving that passion has no age!

*For further information about the Renault Etoile Filante: http://bit.ly/1AOLOj7
** Record established by Nicolas Prost in a Renault Dauphine. The Frenchman was officially clocked at 76.541mph on the morning of August 14, 2016, following technical scrutineering. The 956cc-engined car (N°9561) beat the existing CGC record (Classic Gas Coupé) for cars made between 1928 and 1981 and an engine capacity of between 754cc and 1,015cc.