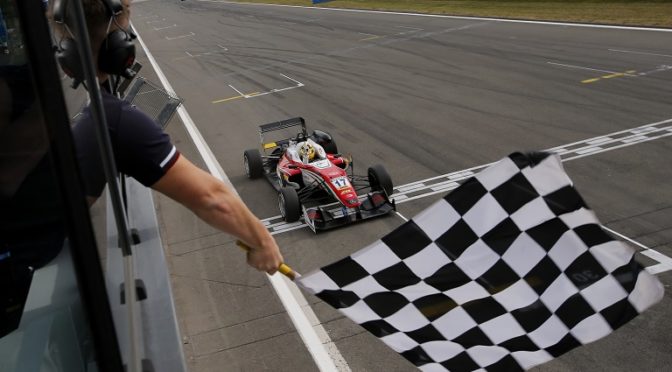 Maximilian Günther (Prema Powerteam) scored his fourth victory of the season in the 24th race of the 2016 FIA Formula 3 European Championship. The German finished ahead of his Canadian team-mate Lance Stroll (Prema Powerteam), who was second. The 17-year-old junior driver of the Williams Formula 1 team still retains the lead in the FIA Formula 3 European Championship drivers’ standings. With six races remaining, he is 68 points clear of his rival Günther, by two years his senior, and 148 points ahead of Nick Cassidy (Prema Powerteam). In bright sunshine at the 3.629 kilometres long Nürburgring sprint circuit, Finnish rookie driver Niko Kari (Motopark) finished third.

At the start, Maximilian Günther benefited from his pole position and immediately took the lead. Behind Lance Stroll, Red Bull junior driver Niko Kari moved up into third place with a courageous manoeuvre under braking for the first corner. In the order of Günther, Stroll, Kari, Callum Ilott (Van Amersfoort Racing), Cassidy and Joel Eriksson (Motopark), the front runners completed their laps of the Nürburgring until the finish.

The battle for the positions further down in the top ten was slightly more exciting. Brazilian Sérgio Sette Câmara (Motopark), a member of the Red Bull junior team, worked his way up during the 26 race laps from 13th on the grid to finish eighth, behind Briton George Russell (HitechGP). The two rookie drivers Anthoine Hubert (Van Amersfoort Racing) and Ben Barnicoat (HitechGP) rounded out the top ten.

Maximilian Günther (Prema Powerteam): “I drove a clean and good race and I am really happy with this victory in one of the few races we have in Germany. I was in control throughout the race and I managed to extend my gap more and more. This victory is the third race win of this weekend for Prema, a nice birthday present for our team principal René Rosin.”

Lance Stroll (Prema Powerteam): “All in all, my weekend was very successful with a pair of victories and a second place. In this race, I was having problems with the rear tyres, something I never had before. Nevertheless, it was enough to finish second.”

Niko Kari (Motopark): “My start was really good. All the others turned towards the inside in the first corner, but I opted for the outside line. It certainly was a little bit of a risk, but it paid off and I was able to claim third place. Then, I wasn’t able to move up any further, Maxi and Lance simply were too fast for me.”