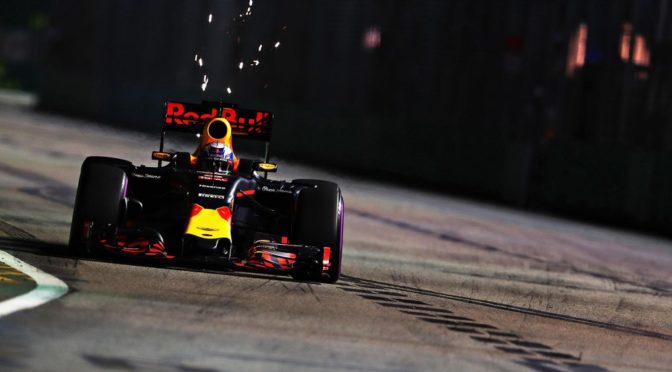 “It was close today. We did everything we could and I thought it was pretty much a perfect race. The only thing that would have been better was to get Nico at the start. Then throughout the race I wasn’t really thinking about what happens when I catch him, I was just focusing on trying to catch him and put some pressure on. I knew his engineer had been on his radio saying: “Ricciardo is catching you, two seconds a lap.” It’s not a nice feeling to hear that, so I was just trying to keep on pushing and keep the crowd entertained. I pushed so much at the end on the supersoft and really tried to do something but it wasn’t close enough. I don’t really leave here with any regrets. Obviously we came here to win and we didn’t but I felt we left it all on the track.”
CHRISTIAN HORNER, Team Principal: “A really exciting finish to a long and hard grand prix. Tyres and strategy were always going to be key to today and in the end opting to go to a three stop strategy with the tyres that we saved from earlier in the weekend brought Daniel tantalisingly close to Nico. Lewis triggered the final round of pit stops with Kimi covering him and then us in turn covering Kimi. That gave Daniel roughly 27 seconds to hunt down Nico who did a good job to manage his pace to the end but Daniel drove an outstanding race to finish 0.5 seconds behind him, splitting the two Mercedes. Unfortunately for Max we had some clutch issues overnight which we thought we’d cured in time for the race, combined with an awful lot of wheel spin at the start, it cost him some time as did avoiding the (Hulkenberg) accident. He was then stuck in traffic and burnt his tyres out fairly quickly in the first two stints. Once he was able to get in clean air he made some great passing moves and was able to make progress back up to P6. Overall a positive weekend, we’ve extended our lead over Ferrari in the Constructors’ Championship, we’ve scored another second place finish and produced an enthralling end to the grand prix.”