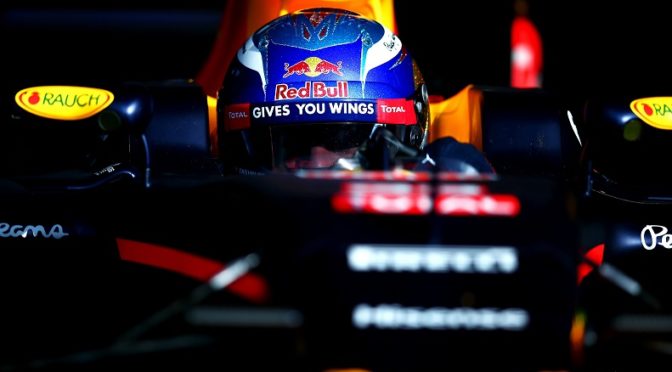 MAX ON THE MEXICAN GRAND PRIX

MAX VERSTAPPEN, Finish Position: 4th*(3rd)*, Start Position: 3rd
“When I went off the track towards the end I think it was pretty similar to Lewis on lap one, corner one. He went off and I felt he gained an advantage, I didn’t even gain an advantage, I was ahead going into braking and when I came back on the track I was the same distance in front so I don’t understand the penalty. I think it was a small bit of justice that the stewards made the decision to penalise Seb. It was clearly a wrong move which has been punished according to the rules. As long as we can stick to the rules every week then we won’t have the frustration we felt after the race. I’m really happy for Daniel to get on the podium after a strong drive and it’s a great result for the team. It makes our second position in the Constructors’ Championship that little bit closer and I believe it confirms Daniel as P3 in the Drivers’ Championship. After a bit of stress we end the weekend with smiles all round. I could have done with a few more laps on the supersoft to get me closer to overtaking Nico, but at the end of the day we were always going to struggle to overtake here due to straight line speed. At the end of the day the Mexican fans have been amazing once again, the atmosphere and noise was great.”
*finish position revised following own penalty and penalty for Car 5 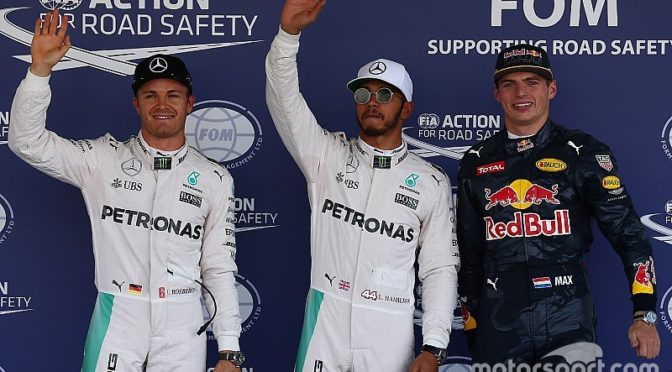 Rosberg had looked set to start behind the Red Bull duo of Max Verstappen and Daniel Ricciardo, but a last-gasp effort got him to within a quarter of a second of Hamilton’s pole time.

LCH: “I had a great start in Austin on the softs, just as good as the guys on the super-softs,” said Rosberg.

“It’s a long run down to Turn 1 so that should be an advantage for the guy starting second.

Rob Smedley, Head of Performance Engineering: It’s quite hard to read today because of the nature of this track, and with everybody struggling to get the tyres to work. Either the fronts weren’t working, or then suddenly they would work and you get oversteer, which we saw from FP1 to FP2 on those running the medium tyres. Overall it’s been a fairly quiet day for us. We completed all of the work we needed to, and I’m reasonably happy with where we are on both low and high fuel. There was quite a lot of graining on the soft and supersoft for everybody, but we seemed pretty good both this morning and this afternoon in having relatively low graining, especially on the front tyres. The focus for tomorrow will be on getting our low fuel set-up right and I’m confident that we have a good direction for that.
Valtteri Bottas: I think it was a good day for us. We definitely still have a lot of work to do with the balance; the track was obviously improving a lot so the feeling of the car gets better and better with every single lap. The long runs seemed to be competitive with the supersoft and the medium, so hopefully we’re looking at a good weekend ahead for us. We still need to make sure that we work hard tonight to make the changes we need to get more performance.
Felipe Massa: It was very difficult to understand the tyres today. The track is just very low grip, but it’s improving every time we go out. You can go out and have no grip, but then suddenly at the end of the run the grip improves. So, I think understanding the tyres this weekend will be very important for the result at the end of the race. I wasn’t happy with the result on the new tyres, but I was happy on the longer runs. We just need to work on understanding everything.

NICO AND SERGIO ON THE MEXICAN GRAND PRIX

Sergio: “Mexico City may be quite far from my city of Guadalajara, but I go there very often for professional reasons. It’s a city I love and there’s so much going on: the best restaurants, so many sights and so many things to do. It is a huge city and sometimes traffic makes going from one side of town to the other feel like an adventure! It is, not surprisingly, one of my favourite moments in the season and last year’s was special not just for me, but for my team and for anyone who came to the race.
“I have no doubt this year’s event will be even better than last year – expectations are huge following the success of 2015. For me, the biggest surprise was the passion of the fans: all the affection I received, all the messages and all the incredible moments I experienced are what really made an impression on me. I am so happy to go back there.
“The track itself is brilliant: my two favourite parts are the fast esses and the Foro Sol. It’s a very technical circuit, with some tricky corners: at the speeds we are doing, managing the car is very complicated and it’s important not to lose your rhythm. There is no key place where you can make or break your lap, except perhaps the slow section inside the stadium: you have to nail the combinations of corners to be able to string together a good lap. I am really looking forward to trying the track surface – last year, the asphalt was completely new, so this year it should be a big improvement.”
Nico Hülkenberg on Mexico
Nico: “I am looking forward to going back to Mexico. Last year the whole race week was a huge thrill and you could feel all the excitement from the Mexican people as Formula One was coming back after more than 20 years. The happiness and enthusiasm were incredible, and the vibe we could feel was great – I had goosebumps the first time I got to the track and saw all the fans. I hope this year we’ll have a similar experience: I know what we had in 2015 will be hard to match, but I trust the locals!
“The circuit facilities are nice, even though the track is perhaps not one of the most challenging. The first sector, though, is fun to drive – turns one to three make up a good combination: it’s a triple corner, quite slow in the race but exciting in qualifying, as it gets quicker with lots of grip and low fuel.
“The altitude makes our set-up choice interesting: we have a high-downforce package on the car, but the thin air results in a downforce level similar to what we have in Monza. The car feels loose and very floaty, and massively quick in a straight line: last year we went over 360kph on the main straight. We had a good result last year and hopefully we can go even better this year.”

LCH IS HE TOYING WITH NICO?

A dominant victory for Lewis Hamilton who wins in the United States for the fifth time. He trims Nico Rosberg’s championship lead down to 26 points, but the German still has the title in his hands at least that how it looks from the F1W studios. Here is a word from Ricciardo…

DANIEL RICCIARDO : “In the beginning of the race the supersoft tyres helped me but the actual start I felt wasn’t really that much better than the Mercedes. Then I saw Nico going to the outside so it gave me an opportunity on the inside. Obviously I would have loved to have lead out of Turn 1 but second was good enough. I tried to stay with Lewis the first couple of laps but then his soft tyres were able to go a bit better. I think we were looking good for P2 but then the Virtual Safety Car didn’t work in our favour today. I’m not going to be too disappointed, it’s just cool to be on the podium here. I love coming here, the anthem was pretty awesome before the race, I had goosebumps, I’m not gonna lie, and then the podium after was great. It’s another big bag of points and we at least had Nico’s pace so that’s encouraging and we’ll try and do what we can in the next few days. Obviously Max and Kimi had their misfortunes today so it was just me and Seb out there, but we still gained a little bit on Ferrari so we’re looking good. We’ll try and keep going like this and get on the podiums for the last few races.”

Fabian Schiller (Team Marc VDS EG 0,0) and Steijn Schothorst (Equipe Verschuur) win the final two races in the history of the Renault Sport Trophy. Winner of the AM Sprint race, despite making contact with the tyre wall, Fabian Schiller concluded the season in style ahead of Fran Rueda (Team Marc VDS EG 0,0) and Jelle Beelen (V8 Racing). After prevailing in the first ever PRO Sprint race of the Renault Sport Trophy, Steijn Schothorst has come full circle in winning the final race ahead of devant Kevin Korjus (R-ace GP) and David Fumanelli (Oregon Team)

Sprint AM: Schiller wins despite the wall.

After taking his fourth pole on Saturday, Fabian Schiller started in the lead. The 2016 Renault Sport Trophy Endurance and AM champion soon built a lead from Fran Rueda before making an unforced error and hitting the tyre wall with the left rear of the car on lap eight.

Fending off the return of his team mate, the German driver went on for his fourth Sprint race win of the season ahead of Fran Rueda and Fredrik Blomstedt (R-ace GP). Overtaken at the start by Miguel Ramos (Equipe Verschuur), before recuperating third place, the Swedish native was disqualified after the race for insufficient compensation weight.