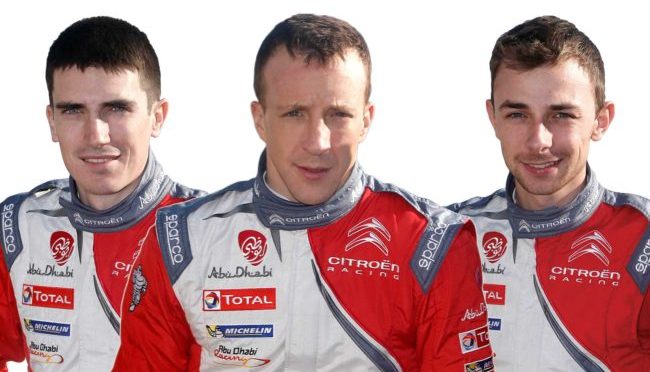 Just a few days after the Citroën C3 WRC concept car was unveiled at the Paris Motor Show, Citroën Racing has announced the crews that will be competing for the team in the next two seasons of the FIA World Rally Championship. Already confirmed to drive for the team until 2018, Kris Meeke/Paul Nagle will be joined by Craig Breen/Scott Martin and Stéphane Lefebvre/Gabin Moreau. Chairman of Abu Dhabi Racing, Sheikh Khalid Al Qassimi will also be competing with his co-driver Chris Patterson at some events in 2017.

Step by step, Citroën Racing continues to assemble the necessary ingredients for its return as a works team in the FIA World Rally Championship. Since April of this year, the Citroën C3 WRC has completed seven development tests, both on gravel and tarmac, and is now very close to the final version.

Until 16 October, visitors to the Paris Motor Show can also admire the Citroën C3 WRC concept car, a veritable exercise in style that heralds the new generation of World Rally Cars, which are set to make their competitive debut at the 2017 Rallye Monte-Carlo.

By announcing now their driver and co-driver line-up for the 2017 and 2018 seasons, Citroën Racing takes another important step forward, one which has been highly anticipated by many WRC observers!

After confirming Kris Meeke and Paul Nagle at the end of last year, the line-up is now completed by two crews considered to be among the most promising young talents in the WRC. Having come to prominence in the rally programmes of the PSA Group and competing this season for the Abu Dhabi Total WRT, Craig Breen/Scott Martin and Stéphane Lefebvre/Gabin Moreau convinced Citroën to put their faith in youth.

This choice is very much in line with Citroën’s long-held policy aimed at identifying and developing talented young rally drivers. In the last 15 years or more, Citroën has identified some of the best in the business: Loeb, Ogier, Sordo, Neuville, Camilli and of course Meeke. Breen and Lefebvre are destined to add their names to this illustrious list!

At the start of the season, the team will enter two Citroën C3 WRCs: one for Kris Meeke and the other for either Craig Breen or Stéphane Lefebvre, who will alternate driving duties. The exact distribution of events to drivers will be announced at a later stage and Citroën will start entering three cars as soon as possible. The FIA’s World Motorsport Council recently decided it would let manufacturers enter three cars, the top two scoring points towards the Manufacturers World Championship.

At some rounds of the 2017 World Championship, a fourth Citroën C3 WRC will also be entered for Sheikh Khalid Al Qassimi and Chris Patterson.

Already involved in the development of the Citroën C3 WRC, Kris Meeke, Craig Breen, Stéphane Lefebvre and Sheikh Khalid Al Qassimi will continue to conduct testing until the new car completes homologation. At the same time, they will be competing at this year’s Rally de España (Meeke, Breen, Al-Qassimi) and Wales Rally GB (Meeke, Breen, Lefebvre) in order to acquire experience driving the current cars.

Yves Matton, Citroën Racing Team Principal: “We had several scenarios regarding the choice of our crews for the future. Kris Meeke was confirmed at the end of last year and has become the natural leader of the team. As well as challenging for the lead on each of his appearances in 2016, winning in Portugal and in Finland, he has also done most of the development work for our Citroën C3 WRC. In choosing two young crews to complete the line-up, I don’t think we can be accused of having gone for the easy option. But this original solution is very much aligned with Citroën’s mindset. And having seen them compete this season for the Abu Dhabi Total WRT, we believe in the potential of Craig Breen and Stéphane Lefebvre. They have the natural talent, motivation and work ethic to win rallies. I would also say we are proud to take these young drivers – who have been with the PSA Group for many years – up to the top level of the sport. At the start of the season, we’ll have no choice but to have them take turns behind the wheel in the second Citroën C3 WRC. However, as soon as possible, our three crews will be starting each round. Sheikh Khalid Al-Qassimi is a true ambassador for rallying in the Middle-East and we are very pleased to support him in his approach.”