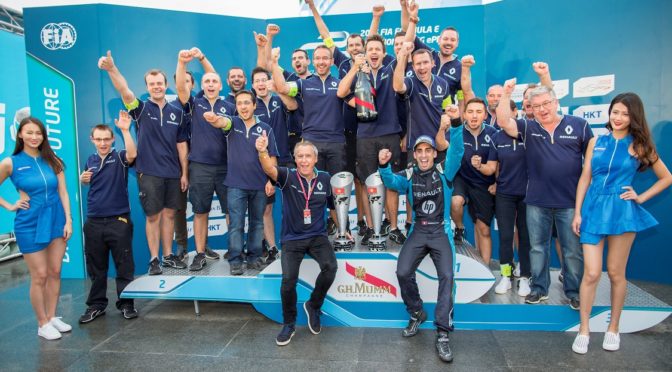 Renault e.dams opened season three of the FIA Formula E Championship in emphatic fashion with Sébastien Buemi taking his seventh career Formula E win and Nico Prost working his way back through the field to finish fourth in the HKT Hong Kong ePrix. The team leaves Hong Kong with 37 points in the Team Championship, ahead of ABT Schaeffler Audi Sport and Andretti Formula E who both have 18 points.

From fourth on the grid, Sébastian drove in a measured and assured fashion to take one position on merit, another thanks to a rival getting tangled up in another’s incident and finally P1 thanks to pit stop strategy. The win means Séb starts his Drivers’ Championship defence with 25 points to Lucas di Grassi’s 18.

If Séb’s race was measured, then Nico Prost’s was fully feisty from start to finish. From P10 on the grid, a mode selection issue meant Nico dropped positions on the initial lap and this was compounded by contact front and rear as the field compressed. On a charge and in the correct mode, Nico blasted past his rivals and worked up the order ending his race just shy of the podium in fourth.

Qualifying earlier in the day had been an eventful affair. Incidents in Q1, Q2 and Q3 meant delayed running and cancellation of Superpole, the net result for the Renault e.dams duo was P4 for Séb, P10 for Nico.

Renault e.dams, Sébastien and Nico will next be seen in action for the second round of season three, the Marrakesh ePrix in Morocco on November 12.

“Initially I thought we’d made a mistake when we made our pit stop under the safety car, but as we saw it all worked out perfectly. I’m happy with today’s result but we certainly had to fight for it. We saw in qualifying just how hard everyone was pushing and the race was not easy for us. I felt a lot happier with the second car today as we made some set-up changes but overall this has been a great weekend and a superb way to start the season.”

“I don’t know exactly what happened on the first lap as I got stuck in the wrong mode and I lost a load of places. Fortunately I was back into the correct mode on the straight so I fought like hell to overtake everyone I could; I was really going for every gap possible! In the end our race turned out really well and we had a great strategy. It was a fantastic result for the team today so I’m really happy for everyone.”