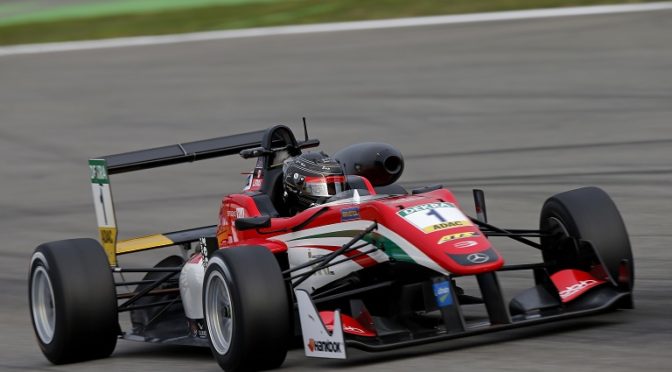 STROLL AND ERIKSSON CLAIM FINAL POLE POSITIONS OF THE YEAR

Lance Stroll (1m31.733s) having inherited pole position for the first race of the final weekend after the car of his rival David Beckmann (kfzteile24 Mücke Motorsport, 1m32.132s) was found to be not in compliance with the regulations, claimed first place in second qualifying on track. The Canadian moved up to the top of the standings in the final stages. Jake Hughes (1m31.912s) ended up in second place and thus ensured a successful comeback for British team Carlin after being absent at the previous two meetings. With third place, Joel Eriksson (1m31.968s) got himself a good position in the battle for the rookie title. Sérgio Sette Câmara (1m32.041s), Callum Ilott (1m32.050s), Nick Cassidy (Prema Powerteam, 1m32.090s), George Russell (HitechGP, 1m32.092s), David Beckmann, Lando Norris (1m32.144s) and Ralf Aron (Prema Powerteam, 1m32.152s) rounded out the top ten.

Lance Stroll (Prema Powerteam): ”Once again, this was a good qualifying. My fastest lap was good, but my second-fastest lap wasn’t quite as good, because I was blocked and didn’t have a clear run. Eventually, I had a clear lap again, but at that time, the tyres weren’t at their peak anymore. As I already have sealed the title, I want to have fun this weekend and attack.”

Joel Eriksson (Motopark): “I think that my fastest lap was quite okay. I even did two laps in a row that were at an equal level. I also had a little bit of luck that I almost had a clean run on these two laps, so I was out there on my own and could drive the laps like I wanted to.”