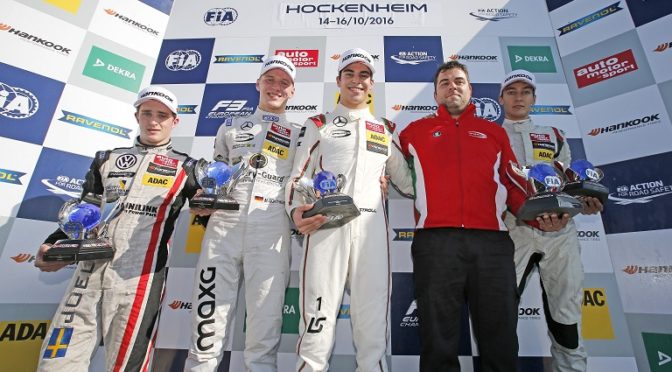 With a hat-trick of wins in the season finale, Lance Stroll (Prema Powerteam) is bowing out of the FIA Formula 3 European Championship. In the third race at the 4.574 kilometres long Hockenheimring Baden-Württemberg, the development driver of the Williams Formula 1 team claimed victory from Joel Eriksson (Motopark) and Jake Hughes (Carlin). Yesterday, Swedish driver Eriksson had already sealed the title for the best rookie of the year while Briton Hughes was making his debut in the FIA Formula 3 European Championship at Hockenheim. With his podium finish, he also made the series’ return of his Carlin team a successful one.

The final race of the season got underway with a nice duel for the lead, a position that Joel Eriksson still held after the start. His challenger Lance Stroll, however, was determined to get past the Swede and overtook him on lap two. A little bit later, Brazilian Sérgio Sette Câmara (Motopark) had to defend his fourth place against charging rivals. On lap twelve, Jake Hughes finally managed to overtake him while the member of the Red Bull Junior team lost another position to Alexander Sims (HitechGP) one lap later. Sette Câmara eventually managed to bring his sixth place home.

Lance Stroll (Prema Powerteam): “This weekend was really good. After starting from fourth place, I didn’t really expect a victory, but my start was very good already. Then I saw a chance against Joel and overtook him. My car was great and I was able to keep a good rhythm until the end. The final weekend has been great fun and I could hardly have hoped for more than a hat-trick of wins. All in all, my two years in the FIA Formula 3 European Championship have been very nice, I really have enjoyed them. They passed really quickly. The FIA Formula 3 European Championship is a great championship with very good drivers and teams.”

Joel Eriksson (Motopark): “My start was good, but Lance made an even better one. On the opening lap, I was still able to keep my lead, but on lap two, Lance went past. He was simply faster than I. After that, I safely brought my second place home. All in all, I am happy with this weekend.”