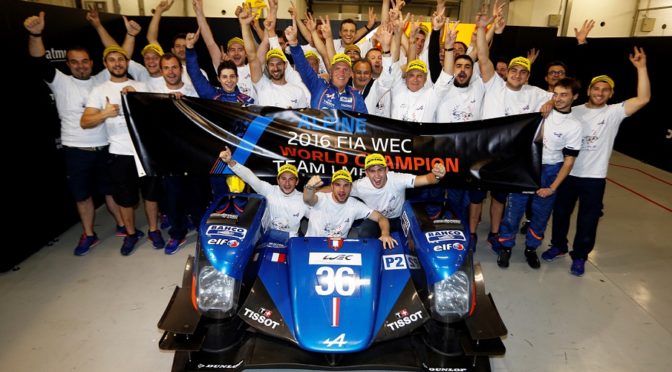 ALPINE HITS THE HEIGHTS WITH THE LMP2 CATEGORY WORLD TITLE!

Rounding off an exceptional season that saw the team win four races – including the 24 Hours of Le Mans – Signatech-Alpine claimed the LMP2 Category Teams’ and Drivers titles in the FIA World Endurance Championship*.

As emphasized by Michael Van der Sande, Managing Director of Alpine, “securing this world title on the track is a fantastic boost for the teams working on the production model, which is due to go on sale next year.”

Indeed, the brand’s return to racing has been very closely linked to the renaissance of Alpine. In 2013, when the Renault Group announced that intended to design a Berlinette for the 21st century, the Signatech-Alpine entered the European Le Mans Series to support this renewal.

This programme echoed the past successes of Alpine in Endurance racing, notably winning the European Two-litre Sports Car Championship for Makes in 1974 and the victory of Pironi/Jaussaud’s A442B at the 24 Hours of La Mans in 1978.

After two seasons full of panache, which saw Alpine claim two European titles, the team decided to fly the flag for France on the world stage as it entered the FIA WEC. The 2015 season, essentially focused on learning about racing at this level, nonetheless saw the Alpine A450b win its first race at the 6 Hours of Shanghai.

This year, the team’s ambitions were raised a notch with the entry of two new Alpine A460s: in addition to the no.36, the number assigned to Signatech-Alpine since 2013, the second car was entered on behalf of Baxi DC Racing Alpine.

After winning races at Spa-Francorchamps, Le Mans, the Nürburgring and Austin, Alpine had a chance of securing the title this weekend at the 6 Hours of Shanghai.

In qualifying, Nicolas Lapierre and Gustavo Menezes finished second in their no.36 Signatech-Alpine. David Cheng and Ho-Pin Tung were tenth in the no.35 Baxi DC Racing Alpine.

The race got off a dramatic start, with some enthusiastic racing on display at the opening corner. Whilst Nicolas Lapierre grabbed the early lead in the LMP2 class, Ho-Pin Tung only just managed to avoid a collision right in front of him!

In an attempt to save his tyres in the extremely hot conditions, Nicolas made no attempt to hold off Alex Brundle (no.26), who took over as leader after half an hour of the race.

Shortly before the end of his second stint, Ho-Pin Tung was hit by a GT at the end of the long start-finish straight. The Baxi DC Racing driver came into the pits immediately and the team changed the no.35 Alpine A460’s front hood. Paul-Loup Chatin took over behind the wheel, whilst Gustavo Menezes replaced Nicolas Lapierre in the no.36. Both cars were racing on hard rubber, replacing the medium compound tyres used since the start.

Whilst running in third, Gustavo Menezes was shunted into a spin by Bruno Senna (no.43). Fortunately, the Signatech-Alpine car did not suffer any damage and was able to continue racing, whilst its title rival was handed a penalty.

Following Stéphane Richelmi’s double stint, Nicolas Lapierre took over behind the wheel with 1 hr 30 mins to go. Unable to challenge for the race win, the Frenchman matched the pace of the no.43 car. He was cheered across the finishing line in fourth position by the entire team, gathered along the pit wall! The celebrations were shared by the Baxi DC Racing Alpine crew. Ho-Pin Tung, who had taken over from David Cheng, ended his home race in eighth place.

In four seasons, Alpine has quickly beaten a path to the top of the podium. This French success story shows the capacity of Alpine to take on challenges, both on the track and on the road. In a few months’ time, the unveiling of a modern, elegant sports coupé built in France will be another important step in the renewal of the brand. Alpine is back… and this is just the start!