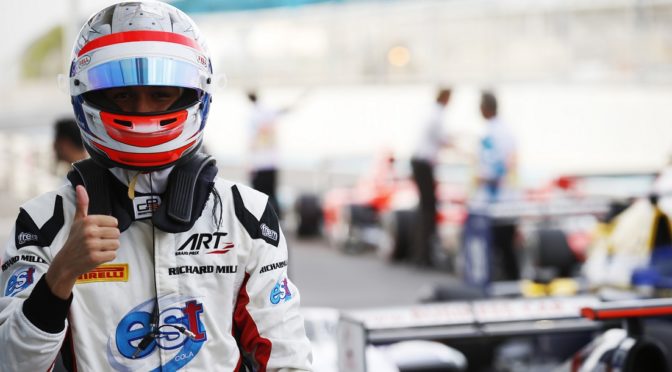 ART Grand Prix’s Alexander Albon could not have looked happier after pocketing pole position at the season finale at the Yas Marina Circuit in Abu Dhabi. The Thai racer’s best laptime of 1:55.274 earned him four bonus points for pole, which cuts his deficit to Series leader Charles Leclerc to 25 points. The Monegasque qualified P5, with fellow title challenger Antonio Fuoco in P11. Arden International’s Jake Dennis and Jack Aitken completed the top three.
Cloudy conditions with a strong breeze set the scene for the thirty minute qualifying session for Round 9 of the 2016 GP3 Series season. Albon immediately set the early place in the 1m56’s before Dennis bettered his time by two tenths. ART Grand Prix’s Nyck de Vries then dipped into the 1m55’s with a best lap six tenths clear of the Briton.
Albon retaliated but could only do enough to split the Dutchman and his teammate to grab P2 before the Arden driver bounced back to second place. Meanwhile Leclerc’s best efforts earned him third position in the first part of qualifying; the Ferrari Driver Academy ace lapped a mere 0.005s faster than Albon. Dennis found some more time but was still three tenths shy of the McLaren junior on provisional pole.
The drivers returned to the pitlane for set-up adjustments and to switch to a new set of the super-soft Pirelli tyre. Dennis lit up the timing screen to go quickest: almost half a second ahead clear of his rivals; but once again Albon was on the attack and he reclaimed his position at the head of the timesheet by two tenths.
Leclerc was also on a charge as he went fastest in sector one but he failed to improve on the rest of his lap. Dennis was also giving it his maximum on his final attempt but gave up his lap when he realised it would not be enough. His fellow Arden teammate Aitken shot up to third place as the chequered flag was waved.
Albon was overjoyed to achieve his third pole of the campaign and reduce Leclerc’s lead in the standings. Dennis grabbed his third front row start of the season with Aitken completing the trio. De Vries qualified fourth, ahead of Series leader and teammate Leclerc. Santino Ferrucci, Arjun Maini, Kevin Joerg, Steijn Schothorst and Nirei Fukuzumi completed the top ten. Fuoco starts just outside of the top ten in P11.
Race 1 takes place tomorrow at 12.25 (GMT+4) and it is one not be miss as a new GP3 Champion could be crowned.