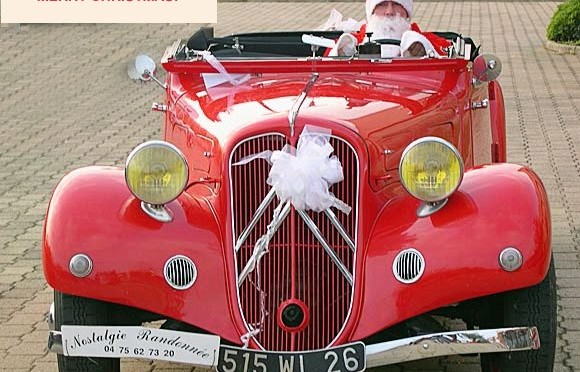 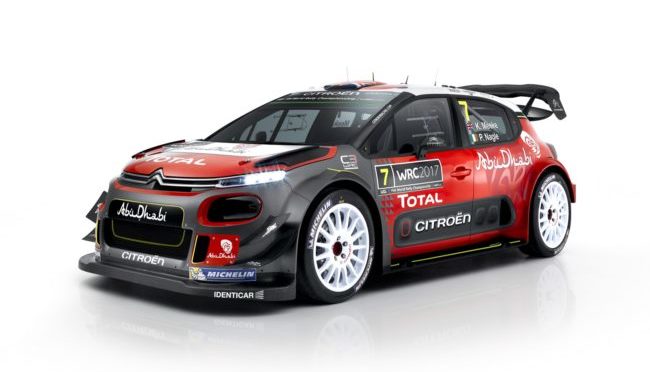 CLARK AND NASIR GO INTO OVERTIME WITH THEIR 2016 FORMULA 1 SEASON REVIEW PART ONE. THE HOST IS BULLISH ON THE UPCOMING SEASON AND IS ALSO EXCITED ABOUT THIS NEWS FROM CITROEN…!! 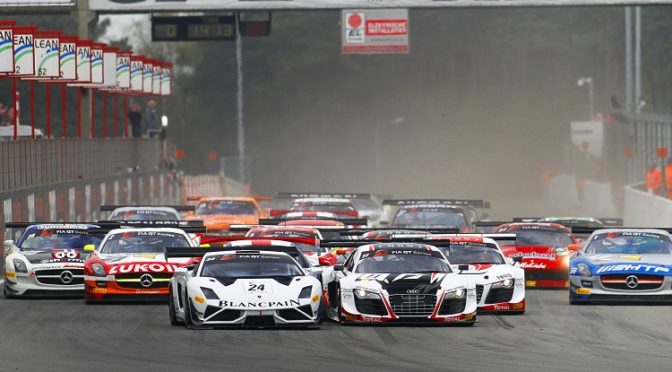 The experience and expertise SRO has earned running global GT categories over the past 25 years arrives in the continent full-time next season. And taking advantage of that opportunity are two more successful teams well known across Asia.

Their Aston Martin will be run by Eurasia Motorsports, a team with a proven track record in the Asian sportscar, single-seater and GT ranks.

Kenneth Lim: “We are very excited to be part of the inaugural Blancpain GT Series Asia campaign. It will be our first full season in the Aston Martin and we cannot wait to start racing.”

CMRTeam by Eurasia’s Aston Martin joins the three Mercedes-AMG GT3s confirmed by GruppeM less than two weeks ago, while further high-profile announcements are expected early in the new year.

The Taiwanese pair will benefit from EKS Motorsports’ extensive Porsche know-how, having been the Porsche Carrera Cup Asia Championship’s Official Technical Service Provider for the past 14 years.

Team Principal Hong Heng Soon: “Blancpain GT Series Asia is the perfect racing platform for us as GT4’s Am/Am format is ideal for our drivers who are stepping up to a more professional environment that features state-of-the-art BoP. Everyone at EKS Motorsports is looking forward to testing the car and the challenge that awaits us. Sepang next April can’t come soon enough.”

Blancpain GT Series Asia General Manager Benjamin Franassovici: “I’m delighted to welcome another two established names in Asian motorsport to the Blancpain GT Series Asia fold for next season. The championship is coming together nicely and we’re expecting to announce more top teams soon. Indeed, at this stage – when considering these latest confirmations, enquiries and firm commitments – we expect to see 20-plus entries for our first campaign in 2017.” 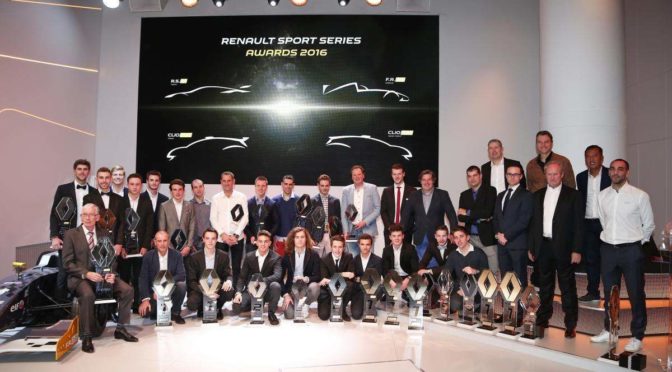 The awards ceremony for the Renault Sport Series’ was held Friday December 9 at the Atelier Renault on the Champs-Élysées in Paris. In the presence of Jérôme Stoll, President of Renault Sport Racing and many guests, this exceptional season came to its conclusion with the rewarding of the stars of 2016.

Renault has been a major contender in motorsport for more than 115 years. This year it opened a new chapter in its long history, emphasising more than ever competition in the centre of its strategy via Renault Sport Racing, the entity that is now based in Viry. This evening was also the occasion to draw the conclusions on the customer competition seasons in rallying and circuit racing, and to hand out the trophies to the laureates.

After dominating the season, Charles Martin received his cup from Jean-Pascal Dauce, Director of the Renault Sport Racing Customer Competition Programme. Charles Martin also picked up the Junior trophy and the Jean Ragnotti Best Performer award. The French driver was joined by fellow competitors William Pitot and Kevin van Deijne. Charlotte Dalmasso, French Rallywoman Champion, and Manu Guigou, third in the French Rally Championship, were also rewarded thanks to their exceptional performances in the Clio R3T.

Jean-Pascal Dauce also handed Éric Trémoulet his winner’s trophy as his rivals Jimmy and Teddy Clairet looked on, but they combined to give Team Clairet Sport the team championship. Pascal Arellano and Jeremy Sarhy were also honoured for their titles in the Gentlemen and Junior categories. After a season of hard battling, the five men will come together in the Team Clio Cup France at the 24-Hours of Dubai next month.

Laurens van den Acker, Renault Director of Design and the creator of the Renault Sport R.S. 01 project, was next on stage to hand his countryman Pieter Schothorst his trophy for winning the PRO category. The Dutchman did likewise for AM category champion, Fabian Schiller who also won the Endurance crown with Markus Palttala. Front runners in a very competitive second season, Kevin Korjus, Fran Rueda, Miguel Ramos and Fredrik Blomstedt were also rewarded as well as winning team Team Marc VDS EG 0,0.

For more than 45 years, Formula Renault has revealed the biggest hopefuls of tomorrow. Following the McLaren BRDC Autosport Awards, Lando Norris was awarded the Eurocup Formula Renault 2.0 winner’s cup and rookie of the year title from Renault Sport Academy Director Mia Sharizman. His toughest rivals, Dorian Boccolacci, Max Defourny and newcomers Sacha Fenestraz and Will Palmer were also honoured, as was Josef Kaufmann Racing, which won the team title for the second consecutive year.

Renault Sport Racing, even stronger in 2017

Renault Sport Racing Managing Director, Cyril Abiteboul concluded the award ceremony in turning to the future of the categories in 2017. The commercial success of the latest generation of the Clio Cup has enabled it to solidify its presence in many markets. Also aiming to participate in Renault’s notoriety, trophies dedicated in France, Spain and Switzerland await the Clio R3T. On the circuits, the Renault Sport R.S. 01 will now demonstrate its qualities in prestigious races around the world. Finally, the Eurocup Formula Renault will have an improved calendar where Monaco and eight other 1 tracks, as well as the Pau street circuit, will allow for detecting young champions and perhaps future members of the Renault Sport Academy 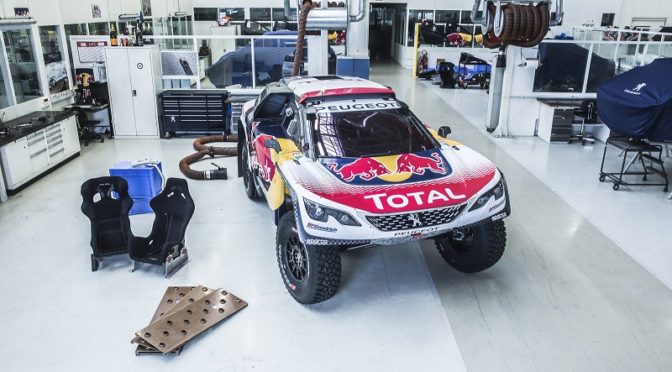 CLARK AND NASIR STILL IN SHOCK OVER NICO’S RETIREMENT BRAZIL AND ABU DHABI STILL FRESH IN THEIR MINDS AND WILL MAX BE A CHAMPIONSHIP CONTENDER NEXT YEAR ALL THIS AND MOTORSPORTS MONDIAL. WE ALSO WANT TO SHARE SOME NEWS FROM RED BULL AND THE DAKAR RALLY COMING AHEAD.

Success at the Dakar depends on great teamwork, there’s no other way to tackle the challenges that arise when traversing 10,000km of the planet’s harshest terrain. That’s why Red Bull have joined forces with offroad experts in every imaginable field to ensure peak performance is maintained throughout the 2017 Dakar Rally.

Once again Red Bull is sharing the road with Team Peugeot Total as they look to defend the car race title they secured at the previous edition of the rally. The brand-new PEUGEOT 3008 DKR has been given an impressive paint job before being shipped to South America and fans of endurance racing can’t wait to see this fearsome machine in action.

here’s also high expectations for the Red Bull KTM Factory Team and Team Kamaz Masteras they look to extend their winning records in the bike and truck categories respectively. With 11 months of preparation now over these teams have waved off their machines from Le Havre, France and will collect them in a few weeks in South America.

As the teams fine-tune their strategies for success at the Dakar we’re cooking up our own plan to bring the rally closer than ever to fans around the world. Red Bull TV will be broadcasting a daily show featuring engaging features and interviews. RedBull.com will have all the latest news direct from the bivouac and the Red Bull Content Pool is offering a constant stream of downloadable content to media outlets.

The Red Bull team of content creators will be hard at work throughout the rally and the stylish yet durable clothing supplied to them by AERONAUTICA MILITARE is sure to help them operate in whatever conditions the Dakar will throw at them. The sportswear brand is endorsed by the Italian Air Force and has been designed to stand up to even the most testing of environments – and that’s exactly what we’ll find at the Dakar!