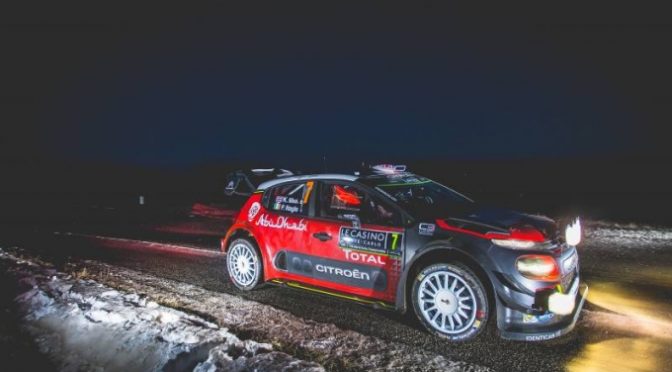 MONTE KICKS OFF AFTER DARK

The 2017 Rallye Monte-Carlo officially got underway on Thursday evening, with a leg taking competitors from Monaco to Gap. During the evening’s only fully completed stage, Kris Meeke set the fourth fastest time, whilst Stéphane Lefebvre was forced to stop with a mechanical issue.

– After setting off from Monaco’s Place du Casino, the crews were to contest two stages on their way to Gap.

– However, SS1 was cancelled after one of the competitors rolled their car midway through the stage. Unfortunately, a spectator was hit in the incident and later died despite the intervention of the emergency services. SS2 went ahead as normal, albeit slightly behind schedule.

– Between Bayons and Bréziers, Kris Meeke and Paul Nagle set the fourth fastest time in their Citroën C3 WRC. In line with the instructions given by the team, the British-Irish crew did not take any risks at the start of the rally.

– Meanwhile, Stéphane Lefebvre and Gabin Moreau were forced to stop on this stage due to a transmission problem. As soon as the car is back to the service park, the team will get to work to ensure they are able to return to action under Rally2 rules.

– Craig Breen and Scott Martin made a promising start to their race, recording their seventh fastest time, ahead of two new-generation World Rally Cars.

– Tomorrow, the rally continues with two loops of three stages, covering a total timed distance of 160.8km. The cars are expected to arrive back at the Gap service park from 5.04pm onwards.